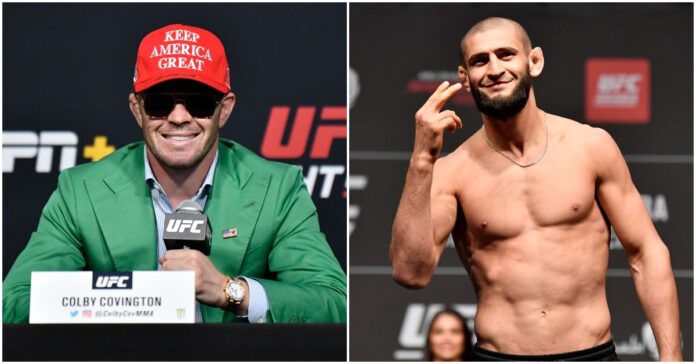 Colby Covington has slapped one of his not-so-nice nicknames on the UFC’s newest star Khamzat Chimaev.

‘The Wolf’ was in what was billed as the toughest fight of his career at the Etihad Arena in Abu Dhabi this past weekend but looked untroubled throughout his three-minute fight with Jingliang. Chimaev picked up his opponent early in the fight and slammed him to the mat. The undefeated prospect chatted with the UFC president Dana White who was cageside while he worked on submitting his tough opponent who he choked out in the first round.

Ahead of his UFC 268 title fight against Kamaru Usman, Covington was asked about the prospect of defending the 170lb strap against Chiamev.

It seems unlikely that Chimaev will be challenging for UFC gold in the near future. The undefeated fighter is just four bouts into his UFC run and has only just cracked the welterweight top 10.

At the moment, it appears that the UFC are trying to book a fight between Chiamev and Nate Diaz. A win over Diaz, who has lost his last two, is unlikely to be enough to put Chimaev in line for the title.

Do you agree with Colby Covington? Do you think Khamzat Chimaev would want to avoid a fight against him?