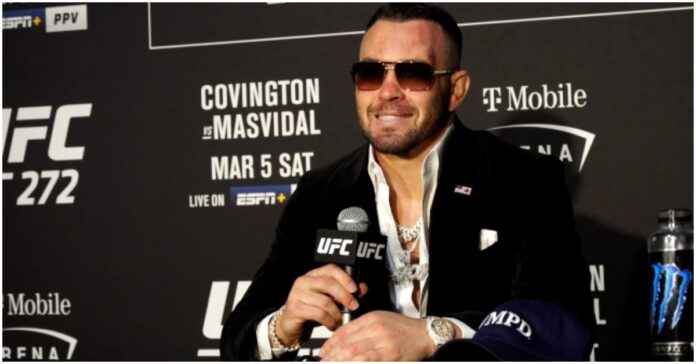 Colby Covington wants a bigger piece of the cake. ”Chaos’ made that much clear while speaking with the press after his unanimous decision victory over Jorge Masvidal at UFC 272.

Heading into UFC 272, it was reported Covington wasn’t earning any points from the pay-per-view purchases.

“This fight I didn’t care about money, I wanted to come out here and fight this guy,” Covington said.

“I was willing to take a pay cut, I would have fought this guy for free.”

Now after beating his former best friend, Covington believes he should be making more than Masvidal, who signed a lucrative new deal prior to the fight.

“He signed the contract right before the fight because he knew he was going to get his a** whopped. He wasn’t going to have any leverage or power to negotiate after I whoop his a** on Monday morning.”

After headlining three PPV’s, it’s going to be hard for the UFC to deny Covington his fair share. He certainly feels that he is deserving.

“I just turned 34 two weeks before this fight,” Covington added. “I’m in my prime, I’m getting better every single day. You haven’t seen the best of me, I still got a long career ahead of me.”

After 25 minutes in the octagon, Covington wanted more of Masvidal.

“I was ready for 5 more rounds in the parking lot,” he said.

It will be interesting to see where Covington goes from here, having already fought Kamaru Usman twice. It seems he has his eyes set on another ATT member, Dustin Poirier. He believes that would serve as a “tune-up” fight before he can meet Usman for the third time.

Covington would prefer to fight three times this year, hoping he makes the walk to the octagon for International Fight Week in July.

Love him or hate him, Covington has proved to be one of the biggest draws in the company.

You can view his full post-fight interview here:

Who would you like Colby Covington to face next?