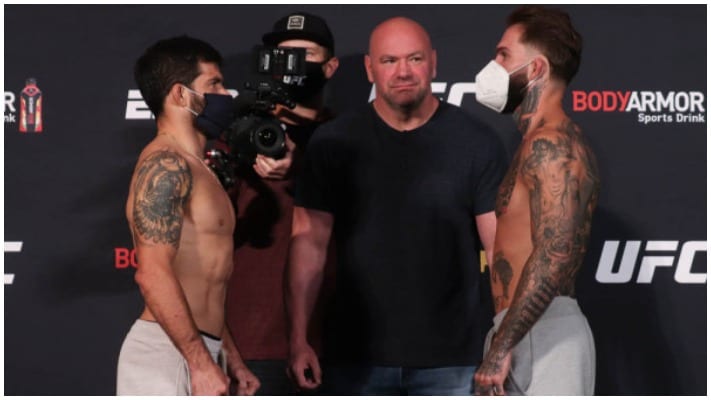 In the UFC 250 co-main event long-time bantamweight contender Raphael Assuncao is looking to bounce back after two consecutive losses inside the octagon. Former champion Cody Garbrandt also heads into this fight on a losing run, all of which have come by knockout. Who will get back in the win column? Lets find out…

Round 1: Cody Garbrandt opens up the fight with several leg kicks. He then fires a punch straight down the pipe and Raphael Assuncao returns with something of his own. The former champion is looking patient and looking much better defensively than we’ve seen in previous fights. Garbrandt lands another straight right and then ducks under the return from his Brazilian opponent. Several low leg kicks from Garbrandt land and one drops Assuncao who drops to the mat momentarily. ‘No Love’ is on his heels bobbing, weaving and bouncing around the cage without a care in the world as round one comes to an end.

Round 2: The second round opens up quickly with a scramble on the mat and as Assuncao stands up he eats a nasty head kick but takes it well getting straight back into the face of ‘No Love’. The Brazilian is consistently switching his stance and seems to be having real problems with one of his legs due to Garbrandt’s low kicks. Lot’s of feints from both men but them eventually clash and Assuncao comes off better. Garbrandt lands a huge right hand over the top that drops Assuncao. ‘No Love’ points at his opponent who claims it was a slip – I’m not too sure. The round is coming to a close and as the horn sounds Garbrandt uncorks an unbelievable overhand to score the knockout. WHAT A SHOT!