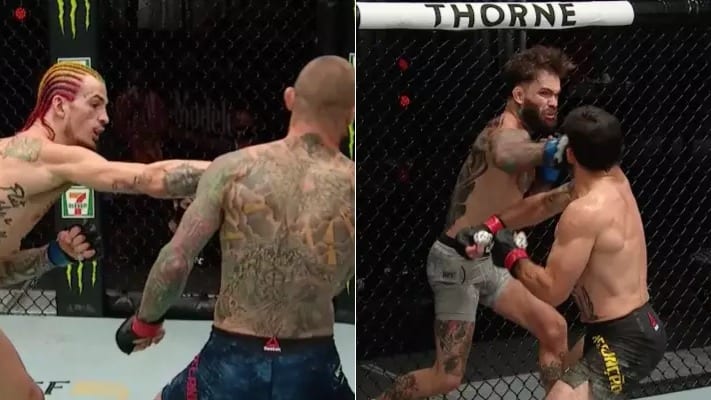 Cody Garbrandt believes he delivered the most impressive knockout this past weekend.

Garbrandt shut the lights off on Raphael Assuncao with a buzzer-beating second round knockout in the co-main event of UFC 250. It followed another impressive knockout earlier in the fight after Sean O’Malley’s impressive first-round finish over former title challenger Eddie Wineland in the main card opener.

Many have since debated as to which one was the superior knockout. O’Malley clearly feels it was his.

Unsurprisingly, Garbrandt feels his was the superior one, especially considering the nature of it and level of opponent in comparison to O’Malley’s.

“Mine was way better. Way vicious, you know,” Garbrandt told TMZ. “My dude couldn’t get up. Stylistically, Assuncao is leap years ahead of any adversary that “Sugar” has ever fought. There’s no comparison, there’s no characteristic like that.

“Hats off to him. He did good, went out there and performed, got a knockout victory but you can’t compare when you’re fighting the top five in the world. He has never fought anybody in the top 15, so that’s a huge difference when you’re able to starch people like that at each level. … The top 10 in our division is crazy. Dominick Cruz is ranked 12th, he’s one of the best so that’s how shark-filled our division is and I’m happy to lead the pack.”

Maybe all this talk of who had the better knockout will lead to a fight between the pair down the line.

Do you agree with Garbrandt?