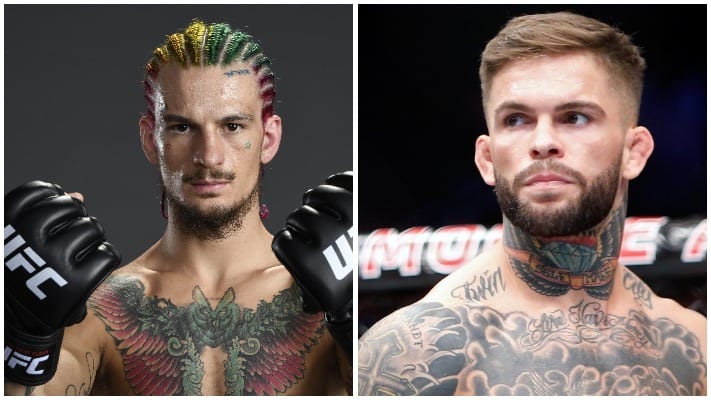 Rising star at bantamweight Sean O’Malley is “100 percent” certain he’d knock out former champion Cody Garbrandt but doubts ‘No Love’ would be willing to accept a fight with him. O’Malley scored a huge one punch, walk away KO over former title challenger Eddie Wineland at UFC 250 this past weekend.

The 25-year-old seems on the cusp of superstardom and ready to up his level of opposition against someone like Garbrandt who also scored a highlight reel KO at UFC 250. Despite wanting the fight ‘Suga’ is doubtful that Garbrandt would be willing to fight him because the former champion has nothing to gain from it, speaking to ESPN he said.

O’Malley admits Garbrandt looked good during his knockout win over Raphael Assuncao this past weekend. Despite that he remains very confident about his chances against ‘No Love’ who he says will suffer another KO loss if they fight next.

“Yeah, absolutely, 100 percent. I feel like I’d knock Cody out. I mean, he looked more improved on Saturday. He looked like he was more calculated, more calm, he looked very much improved since getting knocked out three times,” O’Malley explained. “So, he did improve, he is high-level. He’s a very, very dangerous opponent and anyone that just throws bombs like that is dangerous. I feel like I’m calculated enough, accurate enough, and skilled enough to be able to knock him out. It’s a win-win fight for me.” (Transcribed by BJPenn.com)

Who do you think wins if Sean O’Malley and Cody Garbrandt fight?