LowKickMMA.com
Home UFC News Cody Garbrandt: I Will Knock Out Dominick Cruz 10 Out Of 10... 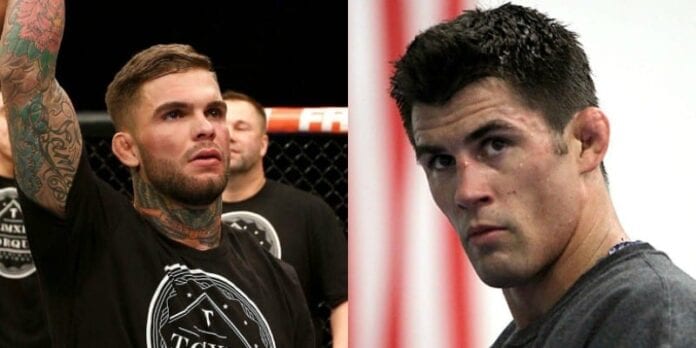 No. 7-ranked UFC bantamweight prospect Cody “No Love” Garbrandt recently established himself as a legitimate threat with an emphatic knockout victory over the previously unbeaten Thomas Almeida in the main event of May 29’s UFC Fight Night 88 from Las Vegas, Nevada.

Even after the tremendous victory, “No Love” may still be a win or two away from a title shot in the resurgent 135-pound division, and he called out No. 4-ranked Bryan Caraway for a bout at UFC 203 after his latest win.

Whatever may lied ahead, Garbrandt will be ready if and when he receives his shot at divisional supremacy.

In fact, “No Love” has been visualizing himself competing against bantamweight kingpin Dominick Cruz for quite some time now, and would be confident that he would put “The Dominator” away if the two were to meet:

“Like I said before, I’ve visualized myself knocking that dude out since I was 16 years old. When he was in the WEC, that’s a guy that I knew I was going to lock horns with one day, and now it’s surreal because it’s almost about to happen. So I have been getting ready for him mentally; putting in the physical camp in and getting the call. He’s a great fighter, but with my style I will knock him out 10 times out of 10.” Garbrandt said during a recent UFC 199 media scrum (Via MMAMania.com).

Garbrandt clearly has his eyes set on the gold, be he can’t get too far ahead of himself. The 24-year-old packs a powerful punch, but Cruz is a master of not getting hit, and “The Dominator” may simply be the best 135-pounder of all-time.

Cruz is coming off of a successful and definitive title defense over long-time rival Urijah Faber, who happens to be a teammate of Garbrandt’s, in the co-main event of last weekend’s (June 4, 2016) UFC 199 from The Forum.

What’s next for Cruz is currently unknown, but it wouldn’t be surprising to see him and “No Love” meet down the line.

Does Garbrandt represent the stiffest test to Cruz’s throne?