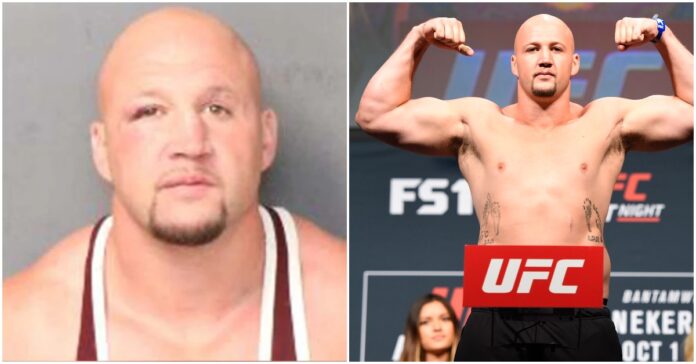 Cody East has been charged with child abuse, false imprisonment, and battery.

First reported by KRQE, Cody East had a domestic violence incident with his wife, taking place over the weekend in Albuquerque, New Mexico. A criminal complaint was filed by his wife, alleging East got into a fight with her and refused to allow her and their kids to get out of the car while making threatening comments.

East is set for a preliminary hearing on April 26th after being released from the Bernalillo County Metropolitan Detention Center on Tuesday, due to “Release on Commitment”

After signing with the UFC from “Dana White: Looking for a Fight”, East had a short-lived tenure in the promotion fighting only twice. In April of 2016 he fought Walt Harris and suffered a first round TKO defeat, following a second round TKO defeat to Curtis Blaydes in October of the same year.

Since his departure from the UFC, East has gone 1-4 his fights bringing his career record to 13-7. His most recent outing was a first round KO loss to Michael Quintero in June 2021 under the RUF MMA banner.

Cody East Has a Long History with the Law

The 33-year-old has had a troubling history with the law. In 2008 he was sentenced to three years in prison after pleading no-contest for child abuse. He also had been arrested for domestic violence in 2006 and 2010 but ultimately did not get prosecuted. East has also faced sexual assault charges twice. In 2016 he faced charges for aggravated battery and assault against a household member and false imprisonment.

What do you make of Cody East’s latest run-in with the law?