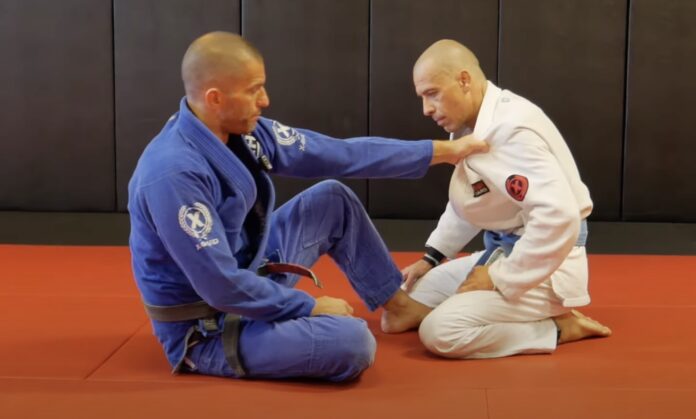 In Jiu Jitsu, practitioners use two different kinds of guard in the martial art. Either closed guard or a variation of open guard.

There are different camps in the debate of these BJJ guards that one style is superior to the other.

Here is a short breakdown of the closed guard vs open guard debate. Going over the history of both guards and the positives and negatives of each style of guard.

The history of closed guard vs open guard

Before we lay out the positives and negatives of closed guard vs open guard, we have to detail their histories. The stories of these BJJ techniques intertwine and symbolize evolution of Jiu Jitsu and grappling

Many grapplers may think that the closed guard came before the open guard, but that would be incorrect. The open guard is one of the oldest grappling techniques in existence.

When a fight would go to the ground, early grapplers would use primitive versions of open guard. Using unrefined sweeping techniques to reverse their opponents and get on top.

These open guard techniques help lay the foundation for BJJ and the importance for knowing how to fight on your back. Through open guard, different types of guards would be developed in the years to come.

The history of closed guard

The closed guard would actually not be developed until decades after BJJ was first being developed. This style of guard began being developed during the late 1970s and early 1980s.

BJJ historians pinpointed that the closed guard first started to be developed in Master Osvaldo Alves’ school. Alves was actually a Judo practitioner, but didn’t want to pay licensing fees to call his gym a Judo school.

He chose to say he taught “Jiu-Jitsu” at his school that was in a rec center. Which was actually just a front for an illegal casino run by an organized crime group.

Alves was also friends with members of the Gracie family, which made cross training at his academy. Two Carlson Gracie students named Otávio Peixotino and Marcio do Santos would routinely go train at Alves’ school.

Osvaldo’s students Sergio Penha and Pascoal Duarte would share guard concepts with Carlson’s students. These brainstorming  sessions would lead to what we now refer to as the closed guard.

They showed that the closed guard was incredibly effective and was widely adopted by almost every BJJ school.

The positives of open guard

Open guard has many positive qualities, which is why it is the most used style of guards in BJJ. Here are the most positive aspects of open guard.

In an open guard, you are far more maneuverable than you are in a closed guard. Your hips are more free to move around and create space to do sweeps and submissions.

In an open guard, there are endless possibilities for evolution. As we’ve witnessed, there are constant innovations made to the open guard.

There are now numerous types of open guards used in Jiu Jitsu along with even more sweeps and submissions.

Types of open guards include:

The positives of closed guard

Close guard has some really good positive aspects, as well. Here are some of the biggest positives of the closed guard.

Best Guard For Self Defense

The closed guard is one of the best guards that you can use for self defense purposes. In a closed guard, you make the distance shorter between you and your opponent.

Making it easier for you to hold onto their arms and keep them from hitting you. Also stopping them from creating distance to try and land a knockout shot.

The negatives of open guard

Even though open guard allows for better maneuverability and has endless possibilities, they do have flaws. Here are some of the biggest flaws with playing an open guard.

To pass any type of guard, you need to create space in order to pass it. When you play open guard, there is a large amount of space already given to your opponent.

They have less steps in order to escape your guard and can also easily strike you.

The negatives of closed guard

If you’re a smaller grappler going against someone that is quite larger than you, closed guard isn’t the best option. Especially if you can’t lock your ankles together to close your guard.

You will not be able to move well and highly unlikely to submit your larger opponent. The larger opponent will also more than likely drop heavy pressure on top of you, which can be unbearable.

Sometimes a person that is playing closed guard realizes that they can’t submit or sweep their opponent. When this happens, they will usually just resort to holding their opponent in their guard.

Doing this turns the closed guard into a stalling position, where no advancements happen and is boring to watch.