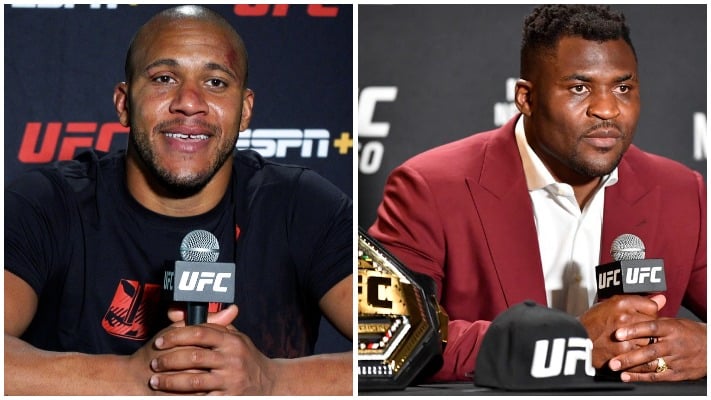 Ciryl Gane thinks he has done enough to earn a shot at his former teammate, Francis Ngannou who currently holds the UFC heavyweight title.

‘The Predator’ is expected to make the first defence of the title he picked up by knocking out Stipe Miocic earlier this year in September against Derrick Lewis. Many fans are hoping Jon Jones will be next in line for a shot at heavyweight gold and the prospect of a trilogy fight between Ngannou and Miocic still looms large.

Despite the crowded heavyweight title picture, Gane is willing to sit out and wait for his shot at the title after picking up a lopsided win over Alexander Volkov at UFC Vegas 30.

“I think we can wait,” Gane said. “This will give us time to improve in some department of myself. So I can wait, and I have a baby coming next month.”

During his rise to prominence, Gane shied away from talk of a potential fight with his former teammate, Ngannou. At the UFC Vegas 30 post-fight press conference, ‘Bon Gamin’ insisted he is now happy to square off against Ngannou for heavyweight gold.

Gane has a perfect 9-0 record. Last night he picked up the biggest win of his career in fairly dominant fashion. Prior to that he scored victories over the likes of Junior dos Santos, Jairzinho Rozenstruik and Tanner Boser to secure his #3 ranking in the division.

Do you want to see Ciryl Gane fight for the belt in his next fight?