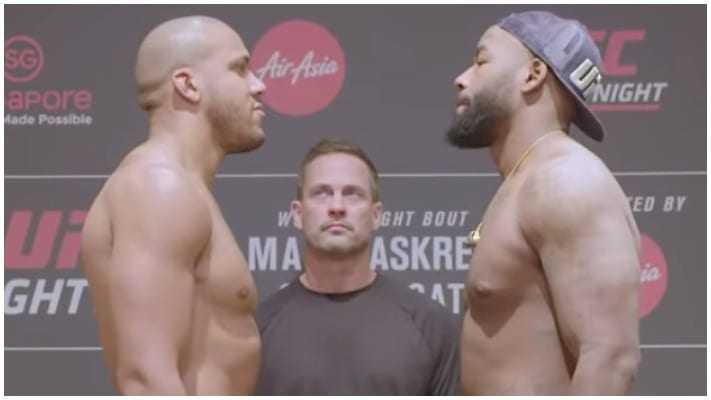 Next up on the UFC Singapore main card is a heavyweight contest between Ciryl Gane and Don’Tale Mayes.

Round 1: Mayes attempts a leg kick but is countered by Gane. Gane attempts a head kick but it’s blocked by the American. Gane is starting to take control as he lands a number of strikes and body kicks. Gane hurts Mayes multiple times and lands a flying knee which eventually drops Mayes. However, he’s saved by the bell.

Round 2: They continue striking until an accidental groin shot from Gane momentarily stops the action. The striking is more even but it’s Gane who is still landing more while utilizing effective head movement. Gane times a takedown well as Mayes responds with elbows from the bottom. Mayes gets up and but is controlled by Gane until the end of the round.

Round 3: We return to striking in the third round and it’s the confident Gane still dictating the pace. However, Mayes is not backing down or giving up as she’s shown a lot of heart. Gane hurts Mayes with a body kick as the American is clearly hurt. Gane looks for the finish and eventually takes him down. He goes for a heel lock and eventually gets the submission.