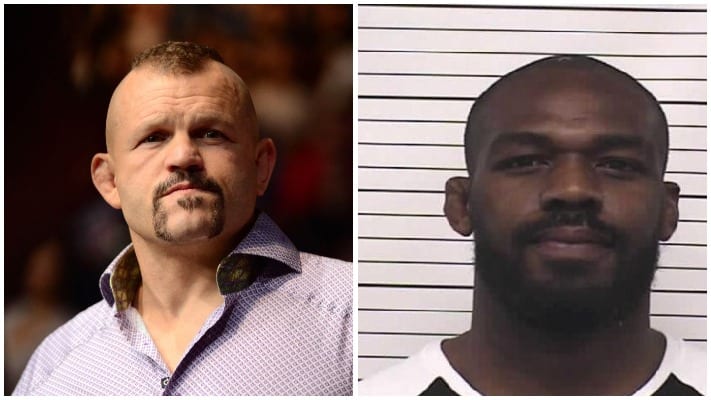 Light-heavyweight pioneer Chuck Liddell believes current 205lb champion Jon Jones is his own biggest enemy. ‘Bones’ was arrested earlier this year for driving while intoxicated and negligent use of a firearm. As a result, Jones is to serve 96 hours of house arrest as well as community service.

The light-heavyweight great has also been having some trouble inside the octagon too. In back-to-back fights Jones has managed to get the decision but not without controversy. A lot of people believe he lost against Thiago Santos and Dominick Reyes but was on the right side of bad judging.

Speaking to Submission Radio Chuck Liddell expressed his belief that Jones should not have been given the decision against Reyes, although he does admit the fight was very close and could’ve gone either way, he said.

“I thought Dominick Reyes beat him too, but by a little bit. But, I mean, it was one of those fights where I say you can’t get mad about the decision. I mean, it could have gone either way. Just deciding how you score the third round. It was close enough, you can’t really complain. But, I mean, guys are getting closer, getting better, getting closer to beating him. We’ll see.”

Beyond his problems outside the cage Liddell sees a big problem awaiting Jones at heavyweight and another one about to move up from middleweight.

“Ngannou, that’s a tough fight,” Liddell said. ”I don’t know, if Jon goes up, if he thinks he can take it. I think he’d gonna have to control the wrestling part of it and it could be a lot of trouble for Ngannou. If he’s like standing there and getting punched, Ngannou hits hard.”

“It seems like Jon’s been having a little trouble with guys coming up from 185. Maybe speed’s a problem for him. I don’t know. But Adesanya, if Jon is able to control the wrestling, able to take him down and control that and control where the fight’s fought, he’ll be in a lot of trouble. But Israel’s tough, man. I like him. And I like them going and forth. It’s kind of funny.”

“It’s entertaining. Those guys are entertaining back and forth. I think if they give it a little more time they can make a big fight out of it.”

Do you agree with Chuck Liddell? Is Jon Jones his own biggest enemy?