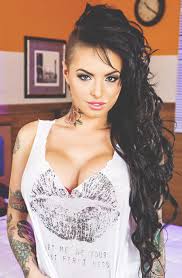 As was reported yesterday (August 8, 2014), Bellator fighter War Machine was cut by the promotion late Friday afternoon, after news had broken that he had allegedly assaulted two individuals at his Las Vegas residence earlier in the day. One of the people injured and transported to hospital was Machine’s girlfriend, adult film actress Christy Mack. Since the incident, the 32-year-old fighter whereabouts has been unknown and he is currently being sought by the “Sin City” police on assault charges.

Today (August 9, 2014), a little more information has come to light and none of it is positive for War Machine. The media outlet TMZ is reporting that Chris Mack is in “very bad shape,” this according to her representative, and is suffering from injuries that make it difficult for her to speak. Further, Mack’s family and friends are offering a $5,000 reward for any information leading to War Machine’s arrest. As Mack’s representative put it, “We just want to find him. We are all very scared.”

Not to be left out of the conversation, War Machine took to his Twitter account and posted a couple of messages – the posts have since been removed – confessing not only his ongoing love for Mack, but what also appears to be a tacit acknowledgement of his being responsible for something having “happened.”

“All I wanted was to surprise you and help and do something nice…now this.”

“I’m so heartbroken… in all ways. I will always love you.”

Regarding the whole incident, one has to be wondering what Machine was and is thinking. First, and without overstating the obvious, he is / was involved with a woman who works in the adult film industry. As such, one would think that his surprise over seeing or hearing of his partner’s extracurricular sexual activity outside their relationship – if that is what it was that set Machine off – would be something that he was or would be, comfortable with.

As to him assaulting Mack and the other individual, MMA fans everywhere will be scratching their head as to what Machine must have been thinking when the alleged assault “happened.” He is a trained fighter and a pretty good one at that, and your average civilian, male or female, is not going to stand up well to his attack. As such, this is not going to play well in court when it finally gets there and it will get there, which brings us to the final point, Machine taking off and failing to turn himself in. Machine cannot run. It is not as if he can jump on a plane and fly away, with the whole mess just left behind him and forgotten. It just does not work that way. Machine should call the police, tell them where he is and hand himself over. It would be the honorable thing to do.