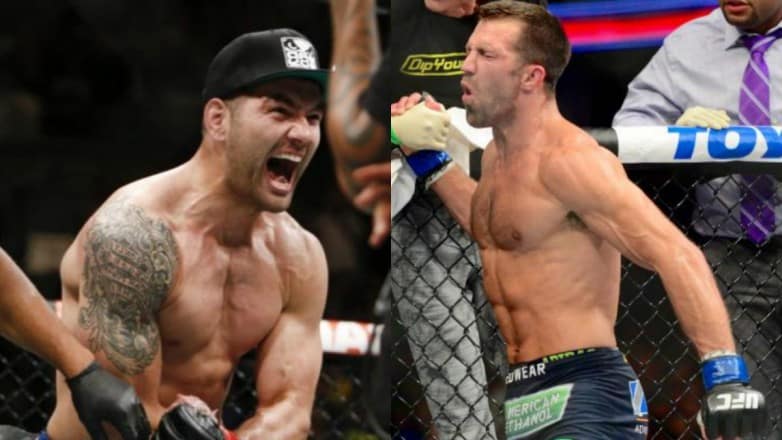 UFC middleweight champion Chris Weidman will take on the fourth contender of his title tenure at UFC 194, in the form of ex-Strikeforce 185-pound boss Luke Rockhold. There’s been quite an interesting dialogue between the two in recent weeks, with ‘Rocky’ boldly claiming he’d finish ‘The All-American’ champion within three rounds on December 12.

Weidman responded at the time saying he wanted fans to remember Rockhold’s comments at UFC 194, and now he’s taken it a step further a full reply:

“I have a lot of respect for for Luke,” Weidman told Fight Network. “He’s got a good skill set, but if he’s believing the things he’s saying right now I can’t wait to just see that look on his face when he finally realizes that he was wrong when we’re in the cage together. I’ll see it. I’ll feel it. It’s a breaking point that he’s going to feel and realize that I’m in a different class than him.”

Weidman, who’s never been defeated let alone stopped, would be a tall order for any top ranked middleweight to finish. As has been discussed many times though, Rockhold, a product of the renowned AKA (American Kickboxing Academy), is probably the best qualified contender to do the job. The champ explains that ‘Rocky’ trash talking doesn’t worry him, and his record speaks for itself:

We’ll have a lot of answers after UFC 194, a win for the champ will be a huge step toward his now confirmed move to the light-heavyweight division, but if he’s dethroned it’s a different story all together. The entire middleweight division’s future is on hold while the championship belt is fought for this Winter, with hungry contenders Yoel Romero and Jacare Souza also competing for the high stakes of a title shot.

We’ve seen Chris Weidman tested, hurt even, but can he be toppled by any of the three mentioned contenders? Of course Luke Rockhold has just been destroying recent competition, but will he have any such luck against the dominant ‘All-American’ from the Serra-Longo camp?

Check out John Pollock’s full interview with the champ, and stay tuned.