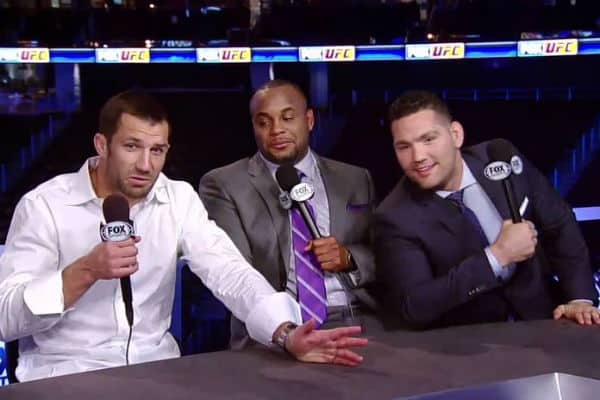 After months of trash talk and speculation, middleweight champion Chris Weidman and Luke Rockhold will finally square off in the co-main event of December 12’s UFC 194 pay-per-view (PPV) from Las Vegas.

The two talented middleweights have known each other for years, and even had a relationship that could have turned to friendship had it not been sort of a foregone conclusion that they would be fighting one day. Appearing on yesterday’s The MMA Hour, Weidman opened up about why he never wanted to talk fighting with Rockhold due to that reason while simultaneously throwing a barb at his current rival:

“We came up, we were both prospects around the same time. I was always number one and he was always kind of like two or three (laughs) coming up. And when we hung out we’d just always talk about fighting, not like us fighting, just like fighting in general all the time but I was just kind of like, whatever, let’s talk about something else. I didn’t want to be awkward.”

The champion then shifted his focus to the fight, proclaiming that he’s ready to run through Rockhold as he has the rest of his competition. He can’t envision a loss, and believes Rockhold is talking tough with fake confidence:

“But I think it’s been a long time coming. We knew that we were going to be fighting at some point; I think he’s a talented guy. I thought we’d fighting a little earlier in our careers, but he’s here now, he’s coming to fight for the belt. I’m excited to just go out there and really run through Luke. I really, I just really cannot imagine myself losing to him. I know he’ll kind of talk the same way, but I think he’s just kind of fake, he knows what to say.”

Elaborating further, Weidman said he believes the whole division is starting to accept his firm grasp on the title. In his eyes, that has fostered insecurity within Rockhold:

“I just think he knows. These guys know, I think they’re starting to get it, and he’s one of the guys who knows. I think he’s a little insecure of himself, I feel that’s why he has puff his chest up all the time and go a little overboard. I just think he’s just insecure and he knows what’s coming. I think he’d much rather be fighting anybody else besides me.”

‘The All-American’ also discussed his goals for the fight, noting that he doesn’t plan to let it go to the judges in any way. UFC 194 will be an amazing opportunity for Weidman to make a statement by finishing a young, dangerous opponent, and he doesn’t plan on letting that slip by:

“I’m working really hard and I’m so excited because this is not a fight I can allow to go the distance or to the judges. I have such a great opportunity here to run through him and truly make I think more of a final statement. Because he’s beaten a good part of the division, I’ve beaten a good part of the division. I think after this fight, the question marks are gone, and I think it’s going to be a huge part of my career, huge part of my legacy this fight, and I know that. And I just have to run through him. Absolutely run through him.”

Finally, Weidman did give Rockhold’s talent some credit, but did so in a backhanded way as to how it would make his victory look all that much better. The undefeated New Yorker didn’t seem all that worried about his opponent heading into possibly the biggest challenge of his UFC career:

“It’s just a really exciting fight. And he’s a talented kid, so it’s gonna look good. I’m gonna look good doing it. Sometimes you fight sloppy guys and it doesn’t look as good. But this kid, he’s athletic, he’s good looking, he has a great body (laughs), and it’s going to be fun beating him up.”