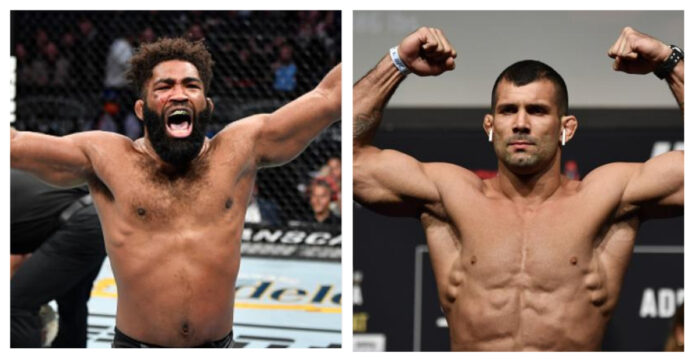 Chris Curtis is set to take on Rodolfo Vieira on this weekend’s UFC On ESPN 38 card, where he predicts to finish the grappling superstar, Vieira, in the second round.

In an exclusive interview with James Lynch for LowKick MMA, Chris Curtis gave his official breakdown of the fight, where he believes his wrestling will be the X-factor, after which, ‘The Action Man’ aims to extend his UFC win streak to three with three finishes.

Although the World Champion grappler, Rodolfo Vieira, was recently submitted for the first time in his MMA career by Anthony Hernandez, Curtis doesn’t see that happening in his bout.

“Probably not going to submit Rodolfo Vieria,” Curtis said, laughing. “I very seriously doubt I’m going to submit Rodolfo Vieira. It’s a classic style fight, striker versus grappler. I think it’s going to come down to who has the better wrestling. Better wrestling and better conditioning. And I think I have the better wrestling and better conditioning, so, we’ll see. I just need to knock him out before he strangles me unconscious, so we’re both racing against the clock to see who gets there first.”

Fight experience is another factor that Chris Curtis believes favors him. He points out the fact that he has a total of 36 fights while Vieria has only 9, making him more comfortable with fighting, and the violence it brings, than Vieria.

“He’s [Vieira] got a billion and one grappling matches but fighting is different. Fighting is a whole different animal and I’m very comfortable with fights, very comfortable with violence. I don’t think he’s quite as comfortable in a fight setting yet, so I think it’ll be a huge thing. People say ‘oh he’s so much bigger, you’re undersized’ and I’m like yeah I’m going to be smaller, but I’ve made that walk so many times exactly four times more than he has. I know that I am confident. I know this is what I do and I love fighting, so I think that’s going to play a huge part.”

For his fight against the grappling expert, Chris Curtis got some good training in with Albert Duraev, who recently competed against Joaquin Buckley on UFC Fight Night: Kattar vs Emmett. Curtis believes that Duraev’s wrestling-heavy attack and overall physicality have helped him prepare for the upcoming fight against Vieira.

“Albert Duraev has been a really really really good training partner for me for this. Albert Duraev is the most oppressive top grappler I’ve ever dealt with my entire life. It’s like if Albert gets on top of you, it’s just miserable. It’s not fun. So I’ve had weeks of like getting beat up by Albert and deal dealing with that.”

UFC On ESPN 38 takes place on June 25, headlined by Arman Tsarukyan and Mateusz Gamrot, but it will be Chris Curtis who’ll aim to get his 2nd performance of the night bonus with another TKO finish.