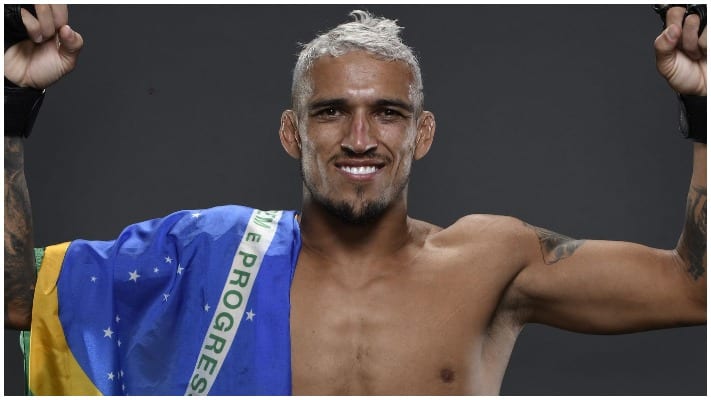 Charles Oliveira plans on shocking the world next month.

Oliveira will face arguably his toughest test yet when he takes on Tony Ferguson in the co-main event of UFC 256 on December 12.

A win against a fighter of Ferguson’s level would not only put Oliveira on an eight-fight winning streak, but also put him in line for a lightweight title shot in the post Khabib Nurmagomedov era.

The rewards clearly outweigh the risk for “Do Bronx” who will be taking the fight on considerable short notice.

“I’m happy for this opportunity to fight Ferguson; I’m taking this fight on less than 20 days notice, but it’s a chance to display my talent and show I’m ready to fight any Top 5 ranked guy, like I’ve been saying for a while now,” Oliveira told UFC.com. “The time has come. I will shock the world on December 12th.”

As for the matchup itself, it’s a highly-intriguing one given that both fighters are similar in their striking and expertise when it comes to grappling.

Oliveira is simply expecting what many in the combat sports world are — a full-out war.

“I’m expecting this fight to be a war, because we’re both good on the feet and on the ground,” Oliveira explained. “We both like to fight, we both move forward. Fans can be sure this is going to be a war, but they can also be sure that when it’s done, my arm will be raised.

“It’s my moment. I respect Ferguson in every way – he’s tough, a fantastic guy – but now it’s my time.”

UFC 256 will be headlined by a flyweight title fight between Deiveson Figueiredo and Brandon Moreno.

Do you think Oliveira can pull off the upset?