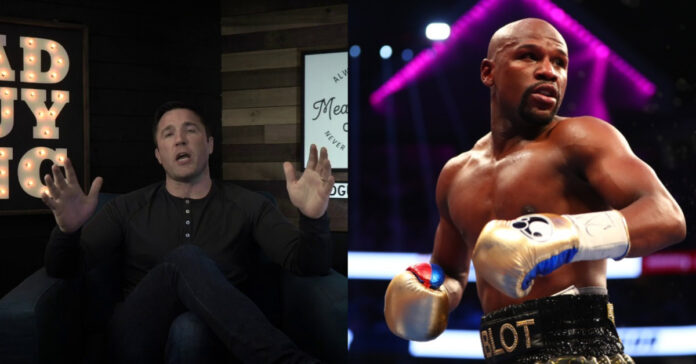 Chael Sonnen has questioned the legitimacy of Floyd Mayweather‘s claims after he suggested he would be earning between $15-20 Million for his exhibition boxing bout against Mikuru Asakura.

A man normally with the inside knowledge Sonnen has claimed that Mayweather has exaggerated the amount he will be receiving by nearly double ahead of his September 25th clash against Asakura.

Speaking on his YouTube channel Sonnen shared his thoughts on just how much Mayweather will truly make this upcoming weekend.

“Floyd is claiming he’s gonna get $20 million for this — I call it ‘rassling because they’re not actually [fighting] — but whatever they’re getting ready to do in Japan, whatever that is that’s going to look like boxing, he’s getting $8 million.”

“Now, eight is a beautiful number. But he claimed he was getting 20. So I feel because I know the real number, that I can’t let it go. I must come to you guys. I have a journalistic obligation to come and inform you it’s actually $8 million and he’s exaggerating.”

It is unknown just how much truth there is to Sonnen’s suggestions but competitors inflating the amount they truly earn is not exactly something you should be surprised by, if true.

Chael Sonnen did not stop there with his claims surrounding ahead of this weekend’s exhibition bout, he took it one step further to claim that the matchup is all part of a ‘script’ to favour Mayweather.

“If Floyd can go in there and get $8 million for whatever that is and he doesn’t have to work very hard, he doesn’t have to train at all because the script is on his side and they’ve already told him who’s going down and when isn’t that something I’d want to emulate?

“Floyd’s gonna go over to Dubai, he’s gonna do something after this, which will represent the second time that he’s done that, and he’s going to get millions of dollars. I don’t know, I think in Dubai, they’re actual competition, they’re just with bums.

“Those might also be scripted like the stuff he’s doing in Japan, I don’t actually know that, I haven’t got to see one, they’re like little private events.

“This is his second time going back [to Japan],” Chael Sonnen said. “People use Floyd once, they get their ass kicked and they don’t go back to him. It was a terrible deal. These guys are. They paid him $8 million, gave him a script, bringing him back again, giving him $8 million, have him read the script.”

It appears Mayweather is looking to keep himself busy to close the year out with reports suggesting he has already scheduled his next matchup against YouTube celebrity Deji on November 13th.

Do you believe there is any truth to what Chael Sonnen is suggesting?