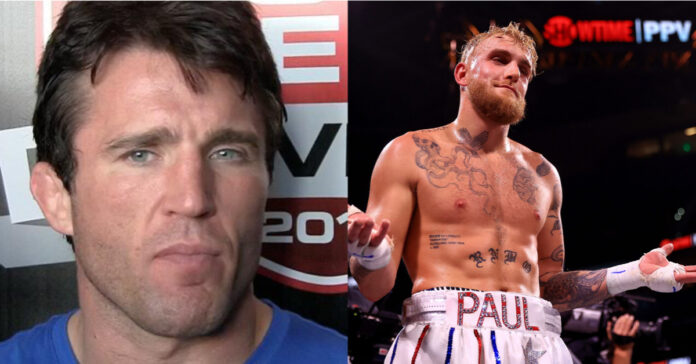 Chael Sonnen claims that Dillon Danis will be Jake Paul’s debut opponent inside the octagon.

Paul recently claimed that he will be making his move to MMA very soon, with one of the biggest organizations in the world. Paul also shared that he would be taking his talents to American Kickboxing Academy, to train under Javier Mendez. He claims that Mendez promised him he would train him, and he also said he “knows jiu-jitsu“. He said the only thing that will hold him back, is learning how to defend and utilize kicks.

“I’m working with a big organization right now,” Jake Paul said “A whole thing in MMA. It also has to do with me fighting and we’re gonna have an announcement soon.”

Paul is currently undefeated as a boxer, with a record of 5-0. He will be looking to take his record to 6-0, when he takes on Anderson Silva later this year in Phoenix.

Chael Sonnen took to his YouTube channel to speculate on who he believes is the perfect opponent will be for Paul. Sonnen put together all the facts, and what made the most sense for Paul. He doesn’t believe that it will be in the UFC, but he believes the organization that makes the most sense is “Bellator“.

“HE does his boxing in Showtime. Showtime hosts Bellator. It’s the same people. The same people Jake is working with for marketing, for PR, for production with boxing, are the same folks at Showtime that also represent Bellator,” Sonnen said. “Not to mention the perfect opponent right now for Jake, is Dillan Danis who is under contract with Bellator, so that would be a strong leading candidate.”

Paul and Danis have been in a feud for some time now, so the two meeting up in the octagon might not be such a bad thing. Fans of the sport seem to despise both fighters, so it would be interesting to see who the public favors in that matchup.