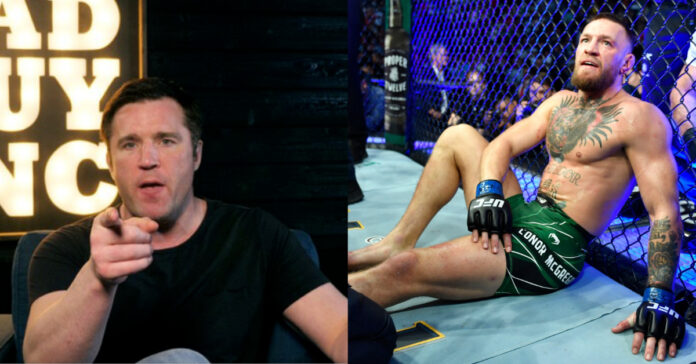 Chael Sonnen has called upon Conor McGregor to explain his absence from USADA testing despite his claims that he will be returning to compete inside the octagon.

Connor McGregor’s physical transformation has been questioned by many MMA fans, given how much muscle mass the Irishman has gained since his most recent octagon outing.

Active fighters have to undergo testing on numerous occasions throughout the year to ensure they abide by the correct rules in place. According to USADA, there are only a select few reasons why he would not be getting tested. This can include if a fighter has retired from the sport, has been released by the UFC, or has been given a medical exception that allows them to not have to test.

Now since it would seem, McGregor does not fit into any of these categories and therefore speculation has built around just how he has managed to not take part in such testing. One man who wants answers from McGregor is former UFC title challenger, Chael Sonnen.

Speaking on his YouTube channel Sonnen has explained that a potential reason for this absence could be that McGregor has withdrawn himself from the testing pool to prevent himself from getting whereabouts violations whilst he is away from the sport. Despite his theory, Chael Sonnen has still called for McGregor to explain openly why this is the current situation he is in.

“Conor has a lot of opportunities. I don’t make anything salacious out of the USADA business. If he is indeed out of the pool, I think it would serve him to tell us why,” Sonnen said.

“24/7 365 to be a part of a (testing) pool that wouldn’t even matter because you’re not going to compete, there would be a responsibility for your lawyer or your legal team to come to you and say ‘Hey, let’s remove you from this pool.’ That might have just been it.” (Transcribed by MMANews)

If Chael Sonnen’s claims are true and McGregor has removed himself from testing whilst he is away the ‘Notorious’ would need to re-enter the testing pool before he could return to competition and soon, should he still aim to return to the octagon in 2023.

Do you agree with Chael Sonnen’s reasoning as to why Conor McGregor has recently been tested by USADA?