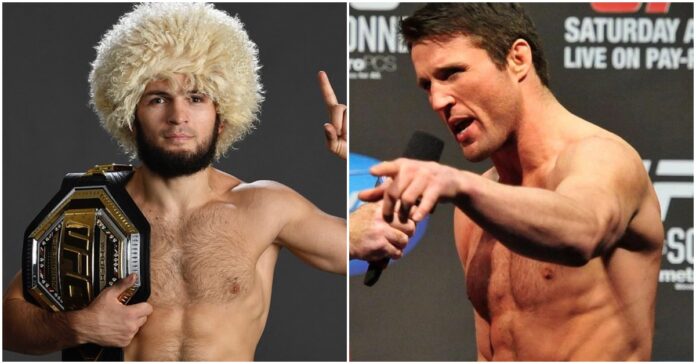 It has been a year and a half, since Khabib Nurmagomedov (29-0 MMA) decided to retire from professional MMA, leaving the game with an untarnished record, whilst being referred and considered to by many as the ‘G.O.A.T’.

Despite ‘The Eagle’ achieving 3 consecutive title defences – tied most in UFC history – in addition, to hardly dropping a single round during his UFC tenor. Chael Sonnen (29-15 MMA) went on to state on his YouTube channel that there is someone he believes would have the toolbox to beat the Nurmagomedov.

“When I would have private conversations… people would ask me all the time, is there anyone that could beat Khabib. Who’s the guy that can stop Khabib?” Sonnen said.

“In private conversations, I would say we actually have a guy now. He (was) 11-0, he’s a national wrestling champion, nobody’s ever come close to taking him down, he’s taken absolutely everybody down, oh, and by the way, he can hold up.”

Even when Khabib Nurmagomedov was sitting comfortably on his lightweight throne, Chael Sonnen goes on to speculate why he believes Gillespie’s relentless wrestling would allow him to keep up with the notorious pace of the Dagestani.

“One thing that Khabib could do was push a pace that was much higher than what the opponent could push back. He made his living getting people tired. That’s how highly I personally think of him.” Sonnen stated.

Do you think Gregor Gillespie could get the upper hand on Khabib Nurmagomedov?