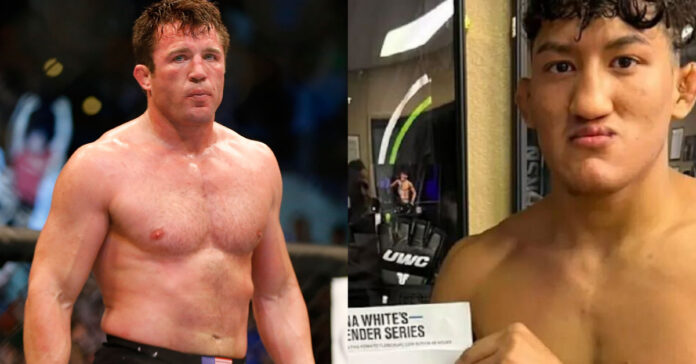 Former UFC middleweight title challenger Sonnen has long moved on from his days of competing inside the octagon but remains a key figure in the sport through his media and promotion work.

In a recent video uploaded to his YouTube account, Sonnen shared his thoughts on the participation of Rosas Jr. in “Dana White‘s Contender Series” this coming week.

“A kid is coming on the Contender Series. He’s had five fights, all took place in Mexico. He’s gonna come out to the Apex, jurisdiction of Las Vegas, compete; youngest kid ever,” Sonnen said. “I would tell you guys… you fight anyone, anytime, anywhere, or you’re a bully and you don’t belong here.

“There would be an exception to that I never once considered, which is a child. You do not have to go beat up a child. I would tell you that, but I never have because I’ve never been confronted with it. I’m just wondering what you think?” Sonnen added. (ht MMA News)

Sonnen theorized that his inclusion could leave the organization vulnerable from a legal standpoint.

“A lot of people will be prudes… There’s a number of states that have athletic commissions that will not allow it,” Sonnen noted. “The law recognizes adult, they recognize minor, and they separate that by 18 years old… So if you’ve been doing it at 17, even 17-and-a-half… Why can’t you do it at seven? From a legal perspective, what difference would it make?

“Before you think, ‘I don’t wanna see children in there,’ I don’t know that I totally disagree with you. It does strike me as weird, too. I haven’t formed an opinion… Within those states where they will not allow minors to compete and wouldn’t allow a minor to take on an adult, they have cities and those cities have gyms. Any age can go in and train and spar.”