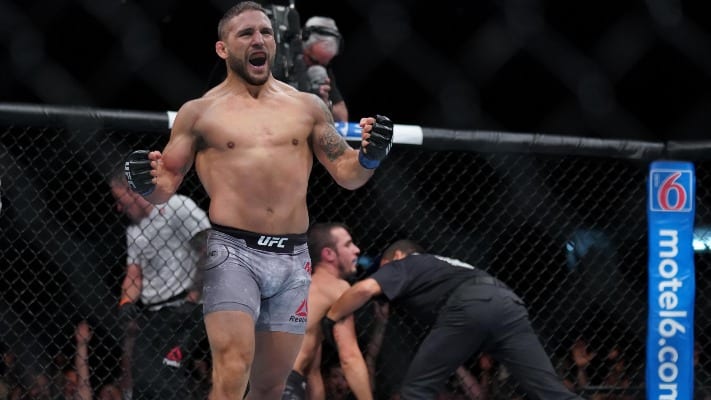 Chad Mendes has confirmed reports that he is, indeed, retired from mixed martial arts (MMA) competition.

Mendes was responding to comments on an Instagram video earlier today (Wed. July 3, 2019), where he confirmed that his days of fighting are now behind him. “Money” suggested he came to the decision back in December following his TKO loss to Alexander Volkanovski:

“appreciate it brotha but I retired in dec.”

Mendes is one of the greatest featherweights to have ever competed in MMA history. His combination of dominant wrestling ability and vicious knockout power provided difficulty for many opposing 145 pounders over the years. The former NCAA runner-up went undefeated with a record of 11-0 before running into Jose Aldo in 2012. He was knocked out with one second left in the first round of his featherweight title bout at UFC 142.

He was able to rack up a five-fight win streak, which included a series of knockout victories, only to be bested by Aldo again – this time via unanimous decision in a very close fight that some still argue should’ve gone Mendes’ way. Following that defeat, Mendes went on to lose three of his next five fights over a near three-year span.

Conor McGregor became the first man not named Jose Aldo to beat Mendes at UFC 189 in 2015 after Mendes took the fight on short notice. He was finished by the Irishman in the second round via TKO, losing out on the opportunity to become interim 145-pound champion. Five months later, Mendes was rendered unconscious in the first round by Frankie Edgar.

Following a two-year United States Anti-Doping Agency (USADA) suspension, Mendes returned in dominant fashion against Myles Jury, winning the fight via first-round TKO. This past December, Mendes fought what would ultimately be his final bout, losing via second round TKO to Volkanovski. Now, at 34-years-old, the Californian has decided to leave fighting behind, instead focusing on endeavors outside of the Octagon.

What do you think about Mendes deciding to hang up his gloves for good?