LowKickMMA.com
Home UFC News Cathal Pendred On CM Punk: I Wouldn’t Be Surprised If He Never... 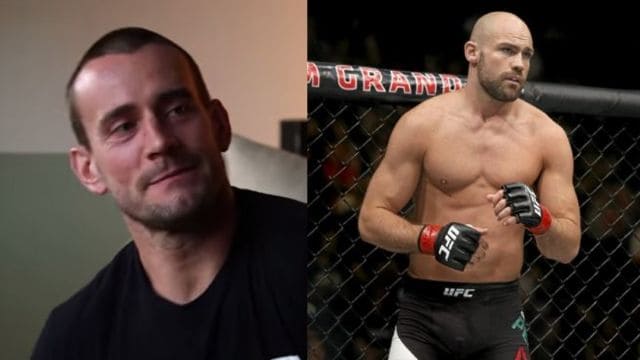 CM Punk and current UFC welterweight fighter Cathal Pendred got into a Twitter fight back on August 13th, 2015. Punk claimed that Pendred was a boring fighter while Pendred was calling out Punk for being a former pro wrestler and the fact that he’s never been in an MMA fight before. Pendred also said that Punk is a stuntman and that Punk would be humiliated in his UFC debut.

Two months later, Pendred still can’t do an interview without talking about Punk.

“I can’t do an interview now without getting asked about ‘Chick Magnet’,” Pendred said with a laugh when asked about Punk by FOX Sports.

“I said it recently, just seeing his more recent interviews around the UFC and stuff, I feel like he’s not in it as much anymore. I don’t feel like his head is in it much anymore. Obviously, as he got deeper into the training, and he got further down the line, he saw how much is involved in this, and I think he realized he bit off more than he can chew,” Pendred said.

“You can even see it now, when he first announced he was doing this, he was at nearly every UFC in Vegas as a guest fighter doing the Q&A’s, and now he’s nowhere to be seen. I do think he’s kind of had a change of heart but the sad thing for him, the unfortunate thing for him is he said publicly he was going to do this. Unless he comes out and just buries his pride and says ‘hey guys, I bit off more than I could chew, this is too much for me, I jumped in at the deep end, and I can’t swim’. We’ll have to see. I wouldn’t be surprised if he never fights.”

Pendred might be down on Punk, but he does understand that whoever Punk fights, it will be a legitimate name. He believes that if Punk does fight and does beat his opponent, it would be better to beat someone with a big name so fans can take him seriously.

“If you think about it, when Brock Lesnar came in — and obviously he’s a different kettle of fish, he’s a collegiate wrestler — but at least he had the decency to go do one pro fight before he came to the UFC. But he was given a former champ when he came in. He has to fight someone in the UFC. I don’t think the UFC are going to sign someone just to fight ‘Chick Magnet’. I think they’re going to have to give him someone that’s already in the UFC because otherwise they’re diluting their product,” Pendred said.

“They’ve spent so much time and money into making the UFC this great product that it is, like they say it’s the NFL or the NBA of MMA, and that’s what they’ve made it so they’re not going to dilute the product and be bringing in Green Power Rangers or anything like that to fight ‘Chick Magnet’. They’re going to have to give him somebody that’s in the UFC.”

Pendred (17-3-1) was on a nine fight winning streak prior to his last fight with John Howard at UFC 189, which he lost by split decision. Now, Pendred fights Tom Breese at UFC Fight Night 76 in Dublin.

Punk has gone on record by saying he would be fighting sometime in 2016.