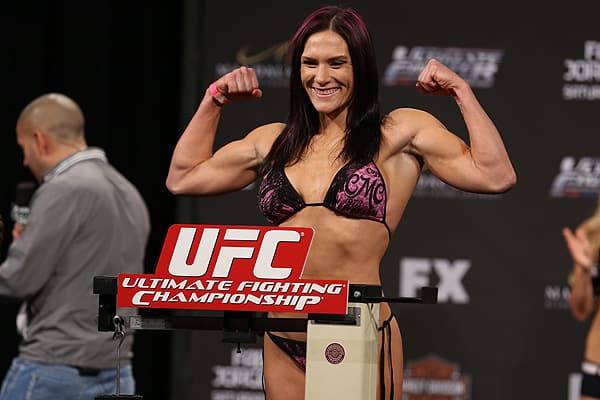 After 20 months out of action, former UFC women’s bantamweight title contender Cat Zingano will finally return to the Octagon at this weekend’s (Sat., March 3, 2018) UFC 222 from the T-Mobile Arena in Las Vegas, Nevada.

There, she’ll meet surging undefeated Ketlen Vieira on the opening main card bout, but Zingano has her eyes on a much bigger prize.

As the only female to beat women’s bantamweight champion Amanda Nunes in the Octagon when she stopped ‘The Lioness’ at 2014’s UFC 178, Zingano told MMA Junkie Radio that while Nunes has gotten better she has as well. From a personal standpoint, Zingano feels she was at her lowest in 2014 after dealing with a serious knee injury and the suicide of her husband but was still able to ‘break’ Nunes in their fight:

There’s little doubt that Zingano’s win over Nunes, even in 2014, was a telling reminder of just how much “Alpha” possesses when healthy and focused on fighting, as do her previous wins over current title contender Raquel Pennington and former champion Miesha Tate.

The win over Nunes was her last, however, as injuries and long bouts of inactivity have kept from establishing any tangible momentum in the last few years. Still, with the women’s 135-pound division lacking in true top contenders, Zingano said her bout with Vieira is a potential title eliminator that could put her right back at the top with an impressive finish:

“This fight, they said it has potential to be a No. 1 contender fight,” Zingano said. “That could be one fight away; that could be two fights away. Either way, I’m focused on this fight, I’m focused on getting through this one in the most fantastic way possible. Of course I want those title shots. Of course I want to jump right back in to where I left off and do everything the way that I know I’m capable of doing. I also understand there’s a patience that comes with it and a believing in myself that comes with it, and taking little steps to get to the big steps.”

The words may suggest she’s looking forward to a title fight with Nunes or Pennington, but Zingano then shifted focus to Vieira, admitting the rising Brazilian was no joke while bringing the confidence of being undefeated to UFC 222:

“Ketlen is not a joke,” Zingano said. “She’s a great fighter, and she’s done good. I know what it’s like to be undefeated and to put that pressure on her and do everything I need to do to end up breaking her down from that feeling, I’ve got work to do. It’s a dangerous fighter that’s undefeated. But what’s next is still to be written.”

This weekend could mark the return of one of the division’s biggest stars, or it could mark her further decline, putting Zingano in yet another tough spot in her mercurial five-year career.

She’s been through it – and much worse – before, but will she be able to climb back up the mountaintop this Saturday?