LowKickMMA.com
Home UFC News Cat Zingano reacts to Cris Cyborg’s claims that she is ‘running’ from... 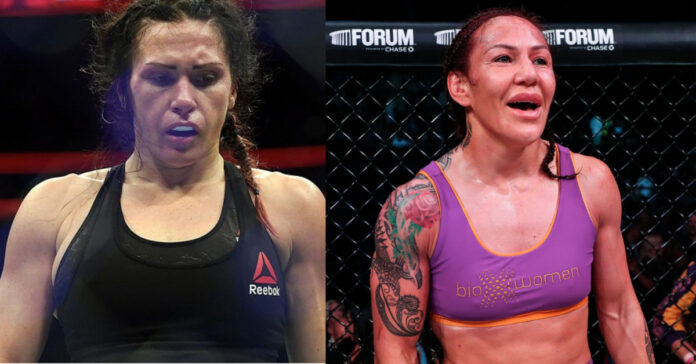 Bellator featherweight, Cat Zingano has labeled Cris Cyborg a ‘f***ing juice box’ following the Brazilians’ claims that Zingano was avoiding a fight between them.

Former UFC veterans Zingano and Cyborg have been on a collision course for some time now following Zingano’s 2020 signing with Bellator.

With the women’s featherweight division being short on elite-level competitors, it was a promising sign when Zingano made the move to Bellator, but two years on from her promotional debut we still have not seen the anticipated matchup and Cyborg seems to be running out of viable opponents.

In a recent interview with MMAJunkjie, Cyborg claimed that the delay was not caused by her, instead, it is Zingano who is putting off the fight.

Zingano would quickly respond to the claims via Twitter, slamming the reigning champion for her claims.

“This b***h left to boxing right when I earned my title shot against her and says I’m running?!” Zingano said. “That’s one way out of drug tests you f*cking juice box.”

Cyborg is due to compete in a boxing match against Simone da Silva in her native country of Brazil but last competed in MMA in April of this year, beating Arlene Blencowe by decision.

As for Zingano, she last fought in June, defeating Pam Sorenson at Bellator 282, making it 3-0 inside the Bellator cage.

Who do you think would win, Cat Zingano or Cris Cyborg?