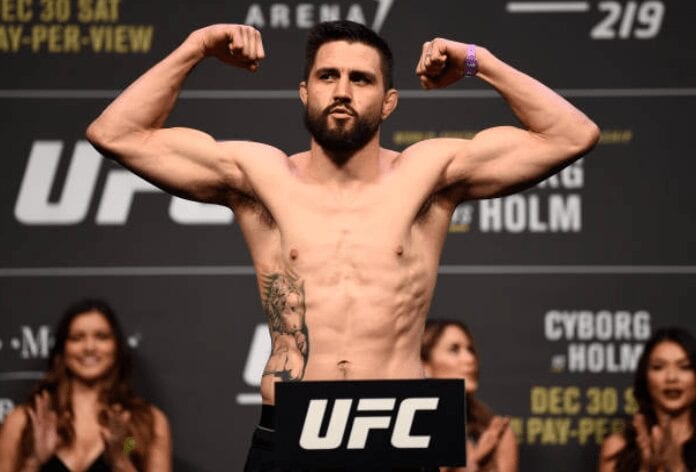 An action-packed welterweight affair is reportedly set for UFC 232.

The fight is set to be Chiesa’s debut at 170 pounds. ‘Maverick’ recently ditched the draining cut to lightweight after a frightening cut at July’s UFC 226. Chiesa was submitted by top contenders Anthony Pettis and Kevin Lee in his last two fights at lightweight. It’s been a trying year for Chiesa after his first bout with Pettis was delayed by Conor McGregor’s bus attack.

The TUF contract winner currently has a lawsuit pending for the ordeal. Chiesa still has to get paid to fight. He’ll have no easy task in perennial top contender Condit.

Once one of the most feared competitors at welterweight, Condit has now lost four fights in a row. They were against top competition like Robbie Lawler, Demian Maia, Neil Magny, and Alex Oliveira. Condit was submitted by Oliveira and Maia.

It promises to be a challenging, telling bout for Condit. We’ve seen many fighters like Rafael dos Anjos and Robert Whittaker go up in weight and find immediate success. Chiesa needs to pick up a win in the worst way. That means it will also be a wholly telling bout for him. The weight cut could enable him to finally fight to his full potential. He could also find himself over his head in a much bigger weight class.

UFC 232 features Cyborg vs. Amanda Nunes for the women’s featherweight title, but the main event has not been officially confirmed.