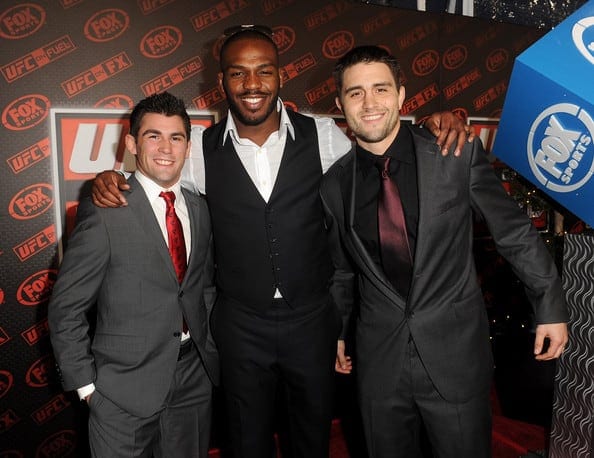 Having been out of action for 14 months now since suffering a knee injury at UFC 171 in March 2014, “The Natural Born Killer” Carlos Condit is gearing up for his return against Thiago Alves at UFC Fight Night 67 on May 30, 2015 in Brazil.

Training out of the highly touted Jackson-Winklejohn camp in New Mexico, Condit is a good friend and teammate to now-disgraced former light heavyweight champion Jon “Bones” Jones, who was recently stripped of his title and suspended indefinitely after allegedly fleeing the scene of a car accident in which he hit a pregnant woman. Jones is facing felony charges and his fighting future is currently unclear, but Condit doesn’t believe we’ve seen the end of the former pound-for-pound king.

Appearing on a recent edition of the MMA Hour with Ariel Helwani, “The Natural Born Killer” says that Jones has been around the gym, and that the two have talked a little bit, albeit not about Jones’ legal troubles. The former interim welterweight champ believes Jones will return at some point:

“Jon’s been around the gym a little bit, which is good,” Condit said on Monday’s edition of The MMA Hour. “I like to see him down there. It’s a crazy situation that he’s going to have to deal with. I think having him in gym doing what he does best, training and trying to keep that side of his life going, is a good thing. [I] Talked to him briefly, but not about incident but about situation. He said, I’ll be back, I’m going to be back. I believe him, there’s no doubt. I think there’s a good chance. In his mind he’s fighting again.”

Condit is now fully recovered since tearing his ACL against Tyron Woodley in his last bout, and he admits that he could not get too emotionally involved in watching fights while he was out or he would go crazy:

“Any time I watch fights I get anxious and I get inspired,” Condit said. “I wouldn’t quite say anxious. Not being able to do anything, I just kinda had to step back and watch as a spectator, especially in my division. I couldn’t have too much emotional involvement in what was going on, or I would go crazy.”

Speaking on the injury itself, “The Natural Born Killer” says he was fully healthy going into his bout with Woodley and the injury was just a freak incident that occurred on a takedown attempt. Being humble in defeat, Condit gives all the credit to Woodley, saying that “The Chosen One” was winning the fight:

“As far as I know, the knee was fine going into the fight,” Condit said. “On a takedown, something weird happened, I’m almost positive that’s where I blew out ACL. I popped back up and got kicked in my other leg. When I went to pivot, I had no ACL knee and the knee just buckled.  He initiated the takedown, I hurt my knee on the takedown. I get taken down quite a bit I don’t always blow my ACL I just think it was kind of a freak thing. I give credit to him, he was winning the fight and then I lost on an injury, but he won the fight. I’m not taking anything away from him.”

As far as his next opponent, Condit has a tough challenge in front of him in the form of a rejuvenated “Pitbull”. Alves has won two-straight since returning from a string of injuries and has looked hungry and motivated in the process. “The Natural Born Killer” actually said that Alves held pads for him once, and the two are “cool” with each other:

“We’re cool, you know?” Condit said. Before I fought Dan Hardy, my coaches hadn’t yet went out to London and I needed someone to hold pads for me, and he held the pads a little bit out there. We’re acquaintances, we’re cool.”

Do you agree with Condit’s assessment of Jones, and can the former champion return to winning ways when he returns?