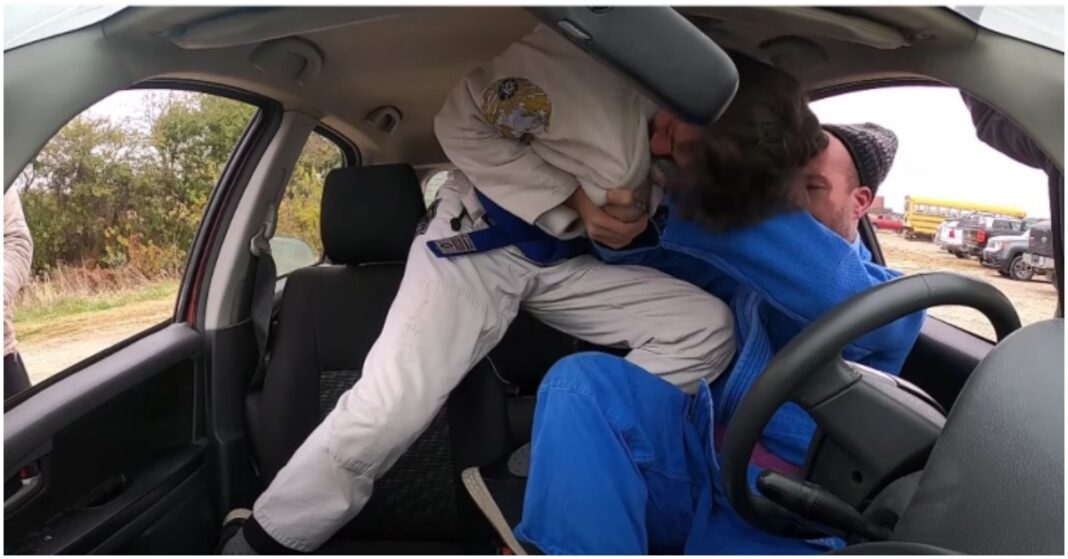 Yes, you did read that right. Car-Jitsu is the newest style of competition to enter the combat world.

If you thought facing someone in a grappling match alone was hard enough, try doing it inside of a car.

Car Jitsu was initially created by Vik Mikheev in 2020. The two participants compete in two three-minute rounds with each player alternating between the driven and passenger in between rounds.

Points are earned by gaining a dominant position or securing a submission. If the score remains tied following the second round, both members will compete in a ‘back-seat only’ grappling match with the winner determined by whoever earns the most points within the 4-minute time limit.

The ruleset states that everything inside the vehicle is considered fair game and allowed to be used and will be classed as ‘creative use of the environment’ that includes mirrors, seat belts, and even the steering wheel. How you use them to your advantage really is yet to be seen but as the sport develops, we are only going to see weird and wonderful moments because of these objects being in play. 4-points are awarded if you can achieve mount or back control, whilst you are awarded two points in you are able to place your knee onto your opponent’s stomach.

Founder Viz Mikheev spoke to the Jiu-Jitsu Times on how he came up with this truly unique idea in the first place.

“In 2020, I came up with the idea of doing competitive grappling in vehicles. Since October of 2020, I and my friends run small tournaments of Car-Jitsu to study the aspects of jiu-jitsu application in such a confined space. (transcribed by mmanews.com)

Many fighters within the UFC will compete in such things as Submission Grappling and competing across these sports can get confusing, Sean Strickland demonstrated this when he gave up his back to Andy Varela who subsequently went onto to secure a Rear-naked choke. At least with car-Jitsu you own be able to just walk off from your opponent.

However, this isn’t the first time we have had a unique styled sport enter the combat world, with competitions such as combat pillow fighting and multi-member team MMA battles, Car-Jitsu will have to be added to the list alongside these.

Would you give Car-Jitsu a try?