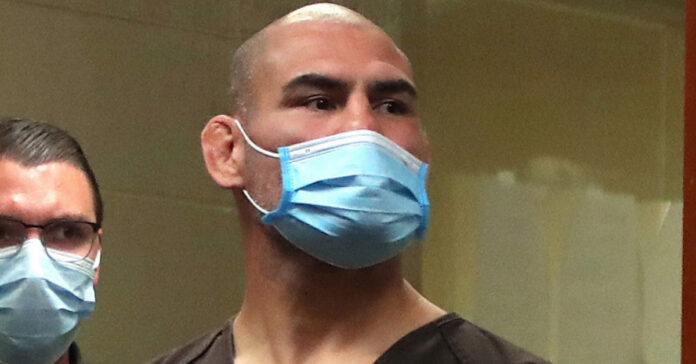 Cain Velasquez has pleaded not guilty to the attempted murder and other charges levied against him.

Former UFC heavyweight champion Velasquez was arrested on Feb. 28 after allegedly getting into a high-speed car chase and firing shots in the direction of a car containing Harry Goularte, a man accused of molestation of Velasquez’s 4-year-old son. Paul Bender, the stepfather of Goularte, was also in the vehicle and was struck by a bullet in the shoulder.

Cain Velasquez pleads not guilty to attempted murder & other charges

Velasquez entered his plea at the Santa Clara (Calif.) County Hall of Justice on Friday in San Jose, Calif. Judge Jessica Delgado served during the plea hearing. A pre-trial hearing for Sep. 26 is now set for Velasquez, whose appeal of his denial of bail is still pending in appellate court.

Another motion hearing for Aug. 29 for Velasquez was set as well. It will be an in-camera hearing where his attorneys will proceed to argue with the representatives from the Santa Clara County district attorney’s office over the inclusion of documents related to Goularte’s arrest, including alleged interviews with the minor victim in the alleged sexual abuse case.

DA attorney Aaron French insisted that only a part of the Goularte investigation was relevant to the Velasquez case discovery. He reasoned it’s still an ongoing investigation and needed to protect the integrity and privacy of minors.

Velasquez’s defense attorneys Alexandra Kazarian and Renee Hessling countered French over plans to not get Goularte to testify as a witness.

“Harry Goularte was fundamental and critical to what he observed and how that investigation against Mr. Cain Velasquez happened,” Hessling said (ht MMA Junkie). “To say that he should just be completely excised from this equation and pretend that he does not exist and just completely dismiss his presence or what type of roll he has in that, I think is a fiction. I don’t think that that is practical. I think it’s fundamentally unfair to Mr. Velasquez.”

If found guilty of attempted murder, Cain Velasquez faces a minimum of 20 years and up to life in prison.