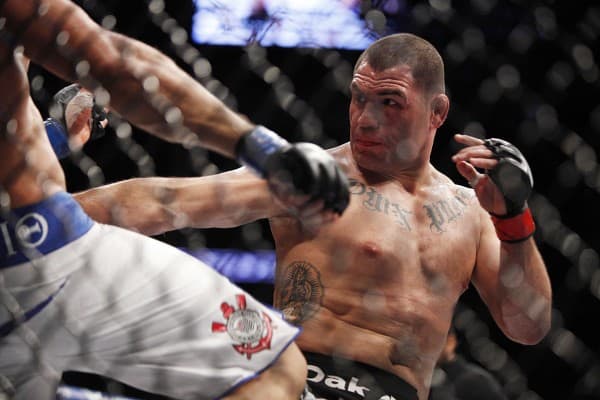 UFC heavyweight champion Cain Velasquez is scheduled to defend his championship for the first time in almost 20 months this Saturday night (June 13, 2015) against Fabricio Werdum. However, he’s not worried about how the long layoff will effect his performance at UFC 188.

During media day on Thursday, Velasquez’s manager, Javier Mendez, told reports that there will be a little ring rust that will be a factor going into this fight.

“There is going to be some ring rust,” Mendez told MMA Junkie. “That’s just a fact. It’s a question of how much, and it’s going to be very little in Cain’s case.”

When asking Velasquez about the long layoff, he wasn’t worried about it at all after going through similar experiences with injuries in the past.

“I’ve gone through this before,” Velasquez says. “I’ve had injuries. So (I wasn’t) so much thinking, ‘Will I be the same fighter I was?’ I knew I would be.”

Cain Velasquez (13-1), is currently on a four-fight winning streak. UFC 188 will be third title defense as heavyweight champion.

Mendez attempted to shift the focus to Cain’s opponent Werdum instead of the much-debated ring rust conversation for his client.

“(Velasquez) worked hard because he knows Fabricio is very dangerous,” Mendez says. “But there’s nobody in the world who’s going to beat Cain Velasquez at his best. You’ve got to remember with him, he’s got the most incredible cardio of any heavyweight, probably in the history of fighting. So I don’t think it’s going to make a major difference.”

Mendez made it clear to reporters that if there is ring rust then so be it; either way, Cain will show and do what he does best.

“Trust me,” Mendez said. “He’ll show up better for this fight than he did for that one. So if you call that ring rust, then OK.”

It’s tough to say where Velasquez truly is after so much time out of the cage. Do you think ring rust will play a large role in his return bout with Werdum tomorrow?