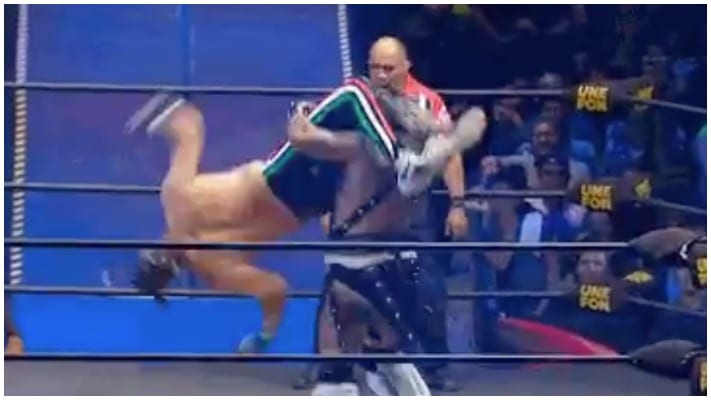 Velasquez competed in a six-man tag match at Triplemania XXVII at Arena Ciudad de Mexico in Mexico City. Teaming up with Cody Rhodes and Pyscho Clown, they faced the team of El Texano Jr., Black Taurus and a mystery partner who turned out to be Impact Wrestling’s Kevin “Killer Kross.

Velasquez’s team eventually won the match — with Velasquez notably getting the kimura submission victory — but everyone was talking about his overall performance more than anything. Donning a black mask, Velasquez performed like a traditional luchador, executing moves such as the hurricanrana among others — moves not usually associated with a heavyweight.

You can see all his highlights below:

“I was really impressed with him,” Rhodes said (via MMA Fighting). “He seemed like a big kid. He was breathing and allowing himself time to take and see/feel the crowd. I was happy to see that debut. And I loved his shoes. Taurus is really special too.

“I would love to see everybody in that ring at AEW [All Elite Wrestling] at some point, even for a one off. Cain also didn’t have ‘happy feet’ and was very calm even when moving quickly. Ahead of most.”

What do you make of Velasquez’s moves in the squared circle?