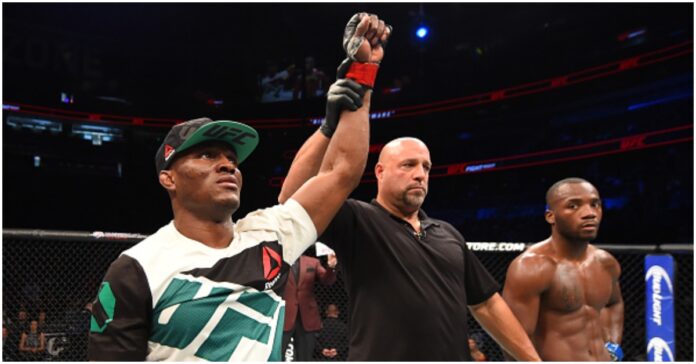 Usman (20-1-0) defeated Tyron Woodley for the welterweight crown at UFC 235. Since then, he has defended his championship five times including multiple defenses against Jorge Masvidal and Colby Covington. The odd man out on that list is Gilbert Burns, who lost in his title bid at UFC 258.

Having both competed against and trained with the ‘Nigerian Nightmare’, Burns believes the next man in line has the tools and the talent to end Usman’s reign.

“I’m telling you right now, Leon Edwards is very underrated,” Burns told Brendan Schaub on ‘Food Truck Diaries.’ “That guy is very good. Just think about it: a striker, long and a southpaw. That’s already tough, and that guy has a great team.”

Edwards (19-3-0) has won his last nine bouts dating back to 2016. In fact, his last recorded loss came against Usman the year before his active streak began. Edwards lost that bout via unanimous decision and has been working his way to a title opportunity ever since. That opportunity is now on the horizon.

“I think out of these three guys, Leon has more chance to beat Kamaru, and I think that fight is gonna be close. Kamaru is very smart. He’s been there a couple of times. I think he’s gonna take the fight very serious, but if he doesn’t, it’s a mistake. It’s a rematch, now fighting for the title. That guy’s been waiting for the opportunity.”

Per a report from Ariel Helwani, the UFC is targeting Usman vs. Edwards 2 for UFC 278 in August. However, Usman’s manager Ali Abdelaziz confirmed to Brett Okamoto that there is no current timeline for the champion’s return as he continues to recover from hand surgery.

Are you excited to see the long-awaited rematch between Kamaru Usman and Leon Edwards?