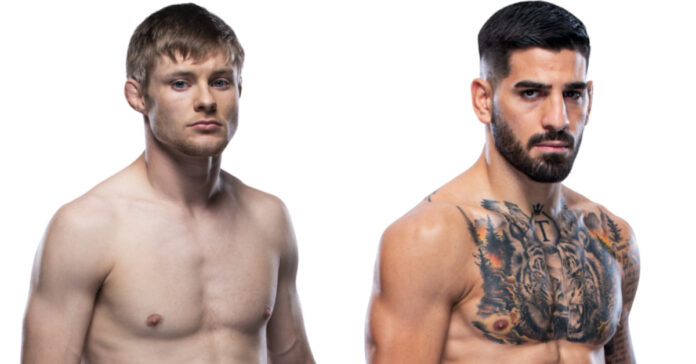 Bryce Mitchell was scheduled to take on Evloev at UFC Fight 214 on November 5th in the main-event slot but after information was released regarding the Russian’s injury speculation has circulated whether Mitchell would remain on the card.

Thankfully for Mitchell now it seems an opponent has been found. Topuria took to social media to declare his interest in the matchup and as of now with the American accepting the call we await to see if UFC matchmakers will confirm this fight to go ahead on the originally scheduled date.

‘Thug Nasty’ had been slowly building up an impressive resume since joining the UFC, holding victories over the likes of Charles Rosa and Andre Fili before providing his most impressive performance to date when he was able to neutralize the ever-dangerous Edson Barboza back at UFC 272.

His new opponent, Topuria, had also been doing the same since his arrival at the promotion. Topuria landed a successful debut after he beat Youssef Zalal in 2020. Since then, the Georgian has gone on to finish his next three opponents holding stoppage victories over Damon Jackson, Ryan Hall, and most recently Jai Herbert at UFC London.

Fans will be eagerly awaiting confirmation from the UFC of this matchup with both men touted as being part of the future of the featherweight division.

Answering the call from Topuria, Bryce Mitchell took to his social media to welcome the opportunity to fight and is looking forward to getting back at ‘El Matador’ after claiming he has been mentioning his name far too much.

‘I see I’m getting called out by Ilia Topuria to fight he wants to go on Twitter and post a picture of his abs, his little perfect eight-pack, or whatever. Hey buddy, you see this, you see that buddy (slapping his stomach). I’ve been eating peanut butter cookies for like three weeks now and I’ll still get off my couch and whoop your a** buddy, I don’t give a damn about them abs. Let’s go buddy I’m tired of you putting my name in your mouth… shouldn’t have done it.’

Despite losing out on what would have been a fascinating matchup with his original opponent, fans of the sport will not be displeased should this new matchup get confirmed.

Who do you believe would win in a matchup between Bryce Mitchell and Ilia Topuria?