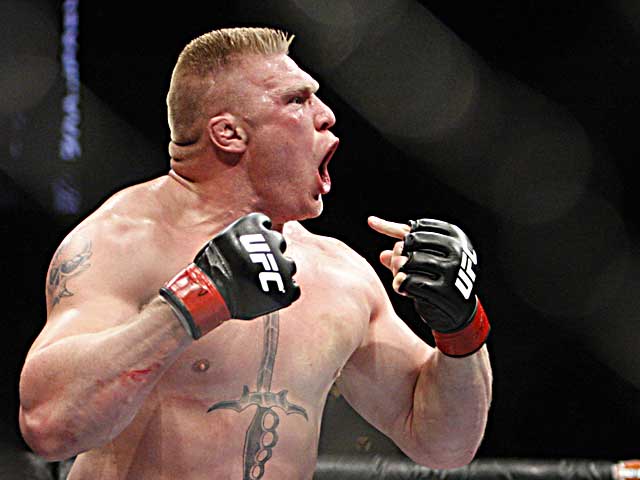 Former UFC heavyweight champion and now WWE star Brock Lesnar appeared on ESPN SportsCenter on Tuesday morning to promote SummerSlam and during that interview, he stated some pretty big things about the UFC.

Lesnar was asked about UFC President Dana White saying that professional wrestling was “fake” in a response to a fan on Twitter last week comparing the WWE Network to UFC Fight Pass.

“Well, of course, Dana, it’s fake, everybody knows that, but you’re promoting the same thing we’re promoting. Dana White is promoting fights, we’re promoting fights. It just so happens we get a little more longevity out of our fight and out of our fighters because of the circumstances. It is a staged arena, everybody knows that. If you can’t turn WWE on Monday night and get something out of that show and be entertained, then there’s something wrong with you. Dana is probably, in his defense, is promoting fighting, but it’s the same thing. He’s trying to sell pay-per-views, he’s trying to sell money fights, it’s the same racket.”

Lesnar then stated that since he has worked for both WWE CEO Vince McMahon and Dana White, he believes that McMahon is a better promoter than White.

“(MMA is) non-rehearsed, absolutely, but the business model is the same, it’s identical. I think Vince McMahon is better at it than Dana and that might rub Dana the wrong way… Vince is the pioneer of it. He’s been doing this his whole life and he’s damn good at it.”

After making three appearances on Sportscenter, Lesnar was asked about UFC women’s bantamweight champion Ronda Rousey and what he thinks of her.

“I think she’s a super athlete in a weak division. I really do. I think she is a man amongst women in the women’s division. I take my hat off to her, she is doing an excellent job at what she’s doing. I don’t know how she’s juggling everything, doing movies and this, that, and the other thing, and then going to Brazil and kicking butt over there and doing all the stuff that she’s doing. My hat’s off to you, Ronda. I’m not taking any talent away from her at all. I think she’s a super beast, super freak in the women’s division.”

ESPN will be covering this Sunday’s WWE SummerSlam pay-per-view live from inside the Barclays Center. Lesnar takes on The Undertaker in the main event.