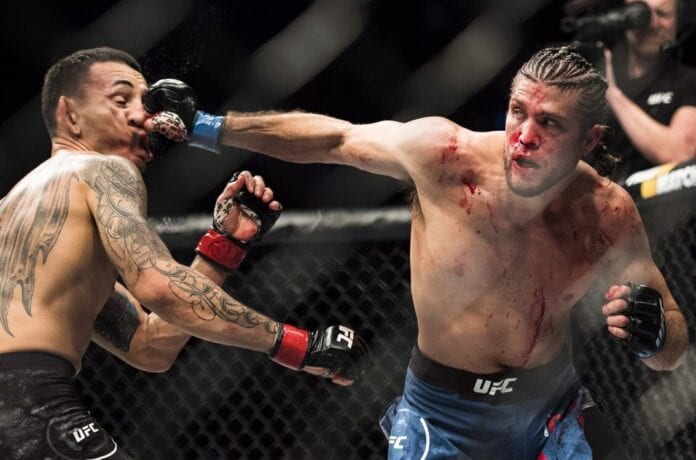 Brian Ortega caught up with MMAJunkie earlier today to talk about his upcoming fight with Chan Sung Jung. There is a lot to be talked about with these two, they certainly don’t think the world of one another.

Ortega opened up on his incident at UFC 248 earlier this year with Jung and pop star Jay Park:

“I’m just like, yo, like Logan Paul said man, even after I did my incident I walked past him, I was very calm. I’m the man, just talk shit get hit man. That’s where I come from.

The Diaz brothers aren’t the only people that’re from a city where if you’re acting a certain way you get slapped. And yeah, as much as you grow up and try to learn things to do better, sometimes it comes out, and it came out.”

He was then asked how he saw his upcoming fight with ‘Korean Zombie’ playing out:

“A slugfest, basically. Me and him kinda already have our thing where we wanna hit each other in the face. So, yeah, honestly I just see a slugfest. And some technical work but, yeah we kinda don’t like each other.”

This whole thing between ‘T-City’ and ‘Korean Zombie’ started when they were scheduled to face one another at UFC Busan last December, and they were nothing but respectful toward one another in the lead up.

Ortega pulled out of the fight citing a knee injury, and Jung ended up facing, and defeating Frankie Edgar instead.

Jung then accused Ortega of ducking him on Ariel Helwani‘s MMA Show, with the help of translator and friend Jay Park. ‘T-City’ didn’t take lightly to these comments, which led to him slapping Park at UFC 248 when they came face-to-face.

Luckily, these two are finally going to square off in the main event of UFC Fight Night 181, October 17. We get a potential five rounds of non-stop action between these two, and they’re two of the most entertaining fighters in the sport.

‘T-City’ hasn’t competed since his losing effort in a title shot against Max Holloway at UFC 231, that was back in December of 2018. ‘Korean Zombie’ last fought in December of 2019, but he’s proven he can compete at a very high level after time away.

Who do you see winning this epic featherweight main event?