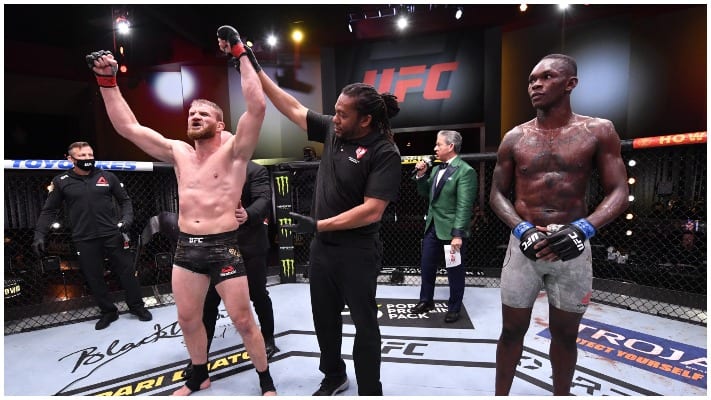 Adesanya failed in his attempt to become a two-weight champion when he was outpointed by Jan Blachowicz in their light heavyweight title fight in the UFC 259 headliner this past weekend.

In the process, “The Last Stylebender” also suffered his first professional defeat as some observers in the combat sports world have been mocking him for failing to achieve what he said he would do.

Schaub isn’t one of them. As far as he is concerned, what Adesanya did was inspirational.

“I’m not gonna come on here and sh*t on Izzy, like I’m sure a lot of the world is doing right now,” Schaub said on his podcast (via Middle Easy). “I like guys that dream like Izzy. I like guys that try to do the impossible. And when they don’t achieve that. When they shoot for the moon and land on the stars. I’m all for it man.”

“I think a lot of fighters should look at Izzy’s skillset and realize that when you jump up those weight classes, even though you have more of a skillset, it doesn’t always translate. So you can learn from this.”

As for what’s next for Adesanya, he has already stated he would be returning to the middleweight division.

And despite suffering his first setback in mixed martial arts, Schaub expects Adesanya to remain undefeated at 185 pounds.

“You don’t think he’s the best 185er on the planet? You’re out of your f*****g mind,” Schaub added. “Just to see what he did to Jan early in those rounds until he got taken down is amazing. So if I’m an 85er I’m gonna be a little alarmed. He’s gonna knock you guys out.”

Do you agree with Schaub?