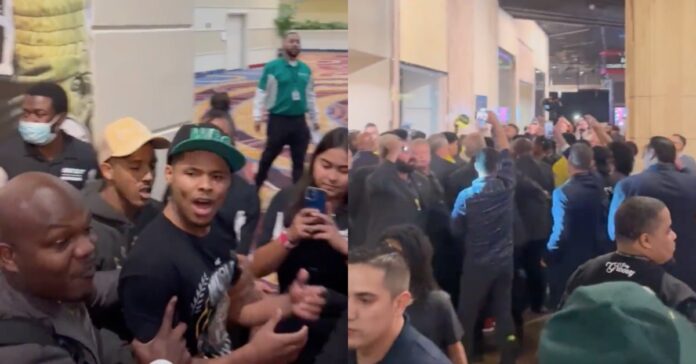 Off the back of his WBC super featherweight championship win last night at the MGM Grand Garden Arena, undefeated uber-prospect, Shakur Stevenson was forced to intervene in an alleged brawl involving his mother, drawing an abrupt close to his post-fight press conference.

Headlining the Las Vegas, Nevada card in a monumental night for professional boxing, Stevenson managed to land his eighteenth professional victory – remaining undefeated with a dominant unanimous decision victory against Sonora native, Oscar Valdez – landing the WBC and The Ring super featherweight championships as well as defending his own WBO super featherweight crown.

Stevenson, an Olympic silver medalist at the 2016 summer Olympic Games in Rio de Janeiro made his professional debut just five years ago, and has been tipped to land in the official pound-for-pound rankings off the back of last night’s success against Valdez in ‘Sin City’.

However, the 24-year-old’s impressive unanimous decision win over Mexico native, Valdez, was briefly hampered by a post-fight brawl broke out during his press conference, forcing him to cut short his media dealings in order to attempt to intervene.

Whilst details of the altercation are limited at the time of publication, reports suggest Stevenson’s mother and members of his team were involved in the post-fight scuffle, with video footage emerging of the brawl at the press conference.

“And a fight broke out just outside of the press conference,” Andreas Hale tweeted. “Shakur Stevenson darted off stage, world titles on his shoulders, into the fray.”

“Apparently two women are accused of attacking Shakur Stevenson’s mother, which abuptly (sic) concluded the news conference when Shakur rushed to her aid,” Mike Coppinger tweeted. “Was unclear what was happening in real time #ValdezStevenson.”