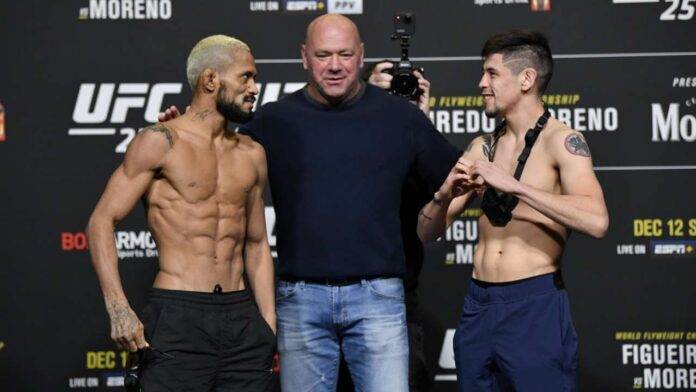 UFC 283 is almost a done deal in Brazil earlier next year with a 4th fight between Brandon Moreno and Deiveson Figueiredo as a possible headliner.

Brazil has been a cornerstone in mixed martial arts since it’s inception, having produced some of the greatest talents in MMA history. UFC has made a point of visiting numerous Brazilian cities over the years, however, it hasn’t been back since the pandemic started. With over 2 years having passed since a UFC Brazil card, the early reports have the UFC linked with Rio de Janeiro at the end of January 2023, with the current Brazilian champ Deiveson Figueiredo reportedly set to unify the featherweight title against Brandon Moreno as first reported by Rodrigo Del Campo Gonzalez.

Brandon Moreno and Deiveson Figueiredo have had one of the best UFC rivalries in recent memory, as the two 125ers have exchanged the belt between each other multiple times over the past couple of years. They first shared the Octagon in a 2020 fight of the year candidate, where Brandon Moreno gave Figueiredo his toughest fight up to that point. However, he failed to capture UFC gold as the fight ended up a draw after Figueiredo was deducted a point in the 3rd round.

The two rematched a few months later in June 2021, where Moreno shocked the world by running through Figueiredo as he choked out the champ in the 3rd round, becoming the first ever Mexican-born UFC champion in the process.

However, despite Brandon Moreno looking levels above Figueiredo in their 2nd fight, the trilogy would be vastly different as Figueiredo displayed better technique and grappling skills along with a new coaching staff that included Henry Cejudo. Figueiredo got his belt back from Moreno via a unanimous decision at UFC 270.

READ MORE:  Darren Till says 'big c**t' Marvin Vettori is 'one of the nicest guys' he's ever met

Brandon Moreno earned a 4th crack at Figueiredo after his impressive TKO win over Kai Kara-France earlier this year.

It’s rare to get two high-level fighters to fight each other more than once, let alone 4 times, but the Brazilian fans will get the pleasure of cheering on their fellow Brazilian, as both Brandon Moreno and Deiveson Figueiredo will attempt to break the 1-1-1 tie between the two at UFC 283.