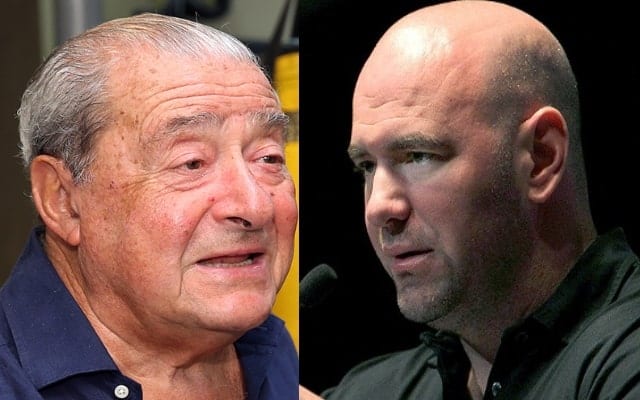 Legendary boxing promoter Bob Arum has slammed Dana White and the UFC their ‘cowboy behavior’ during the coronavirus pandemic.

Arum has previously spoken out against White saying he “ought to be ashamed of himself” for pressing ahead with events right now. Speaking to Boxing Scene he has again gone after the UFC president and insists he won’t be putting on events until it’s safe to do so, he said.

“Good luck to them. I just hope that they’re not endangering the safety of anyone. But this kind of cowboy behavior doesn’t do anybody any good.

“We’re looking now with Nevada, which we’ll do in a sensible way, or California. We’re working with (Nevada Athletic Commission executive diretor) Bob Bennett and (California State Athletic Commission executive officer) Andy Foster, and we’re talking to the Texas commission. We’re only gonna do this if it’s safe for the fighters and everyone involved, and if it’s approved by the medical authorities.

“We’re not gonna be cowboys, like Dana White. I don’t wanna get politics involved, but I have really very little respect for Dana and what he’s doing.”

“I think the behavior of people in sports we should be following are Adam Silver of the NBA, Roger Goodell of the NFL – people who are proceeding cautiously and safely, not people who are acting like cowboys.”

Arum used the failed April 18 UFC 249 show as an example as to why events shouldn’t go ahead right now. Lyman Good was supposed to compete on the card but was later found to have tested positive for the coronavirus.

“For example, (the UFC) wanted to do this fight in California and they were prevented by the governor and by senator (Dianne) Feinstein going to ESPN and having Dana pull (the event).

“It turned out one of the fighters, in fact, tested positive afterward for coronavirus. You know, if we get something like that on one of Dana’s shows, and God forbid there’s a serious incident of spreading the disease, it doesn’t do well for anybody who’s involved with sports.”

Do you agree with Bob Arum? Is Dana White acting dangerously right now?