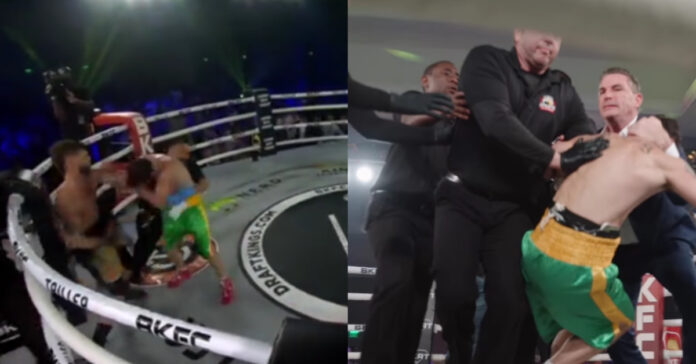 BKFC brawlers Jack Grady and Ryan Reber got into a wild brawl at BKFC 32 on Saturday night after Grady was disqualified for intentionally headbutting his opponent twice.

In the opening moments of the bout, Grady backed Reber up to the ropes and intentionally threw a headbutt prompting the referee to pause the action. A one-point deduction was issued to Grady and the fight was restarted from the scratch line. From there, the intensity clearly picked up with Reber landing a blatantly late blow on Grady after the first round had come to a close, forcing the referee to issue a warning.

The fighters made it through a majority of the second round without issue. That was until with 20-seconds left on the clock, Grady once again backed his opponent against the ropes and delivered another headbutt. It was then that the referee had seen enough, separating the fighters and waving off the bout. Jack Grady had been disqualified. At that point, Reber approached his opponent and delivered his best ‘Stone Cold’ Steve Austin impression, flipping Grady double birds.

In response, Grady immediately shoved Reber to the ropes and ate an uppercut for his trouble. The corners of both men leaped into the squared circle to stop the impromptu brawl. Even BKFC President Dave Feldman got involved, rushing into the ring and tackling Grady to the mat as Reber watched from the opposite side.

Another angle of the brawl and Dave Feldman’s involvement in it can be seen on BKFC’s Instagram.