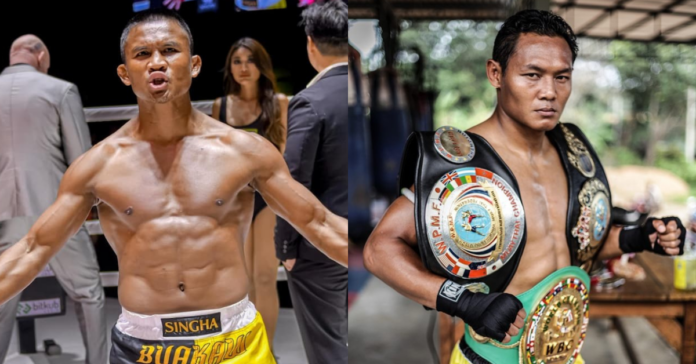 Saenchai is a multi-time Muay Thai stadium world champion with an incredible record of 314-41-5. Buakaw has faced some of the greatest kickboxers in history including Nieky Holzken, John Wayne Parr, Giorgio Petrosyan, and Masato Kobayashi among many others. This fighter held world titles in Muay Thai and Kickboxing, including two championship wins at the prestigious K-1 MAX World Grand Prix.

The Thai-born athlete is recently coming off a bare-knuckle win as he earned KO victory in round one of September 2022 at BKFC Thailand 3.

BKFC Asia CEO Nick Chapman offered a breakdown of this legendary matchup during an interview with LowKickMMA’s Tim Wheaton, he explained:

“Saenchai has the best fight IQ I’ve ever seen. He’s a wizard … Buakaw is a beast. Buakaw has power, strength, his toughness is next level.”

However, the size difference is notable. BKFC will be having the larger Thai-born fighter cut weight for this match. And to help even the odds, clinch time will be reduced. Chapman continued:

“Buakaw is slightly bigger so he’s got that slight advantage. So Saenchai was concerned about the size. So I said okay. Well, we’re going to make Buakaw cut to 68.5 [kg], [Saenchai] will come up half a kilo because walks around at 68 … We’re reducing the clinch. They’re only allowed two-seconds and then split so Buakaw can’t lean on him and wear him down … Zero gloves, zero wraps, completely bare-knuckle.”

The promotion was also concerned that Buakaw and Saenchai may be too friends with each other. The two legends were offered a friendly exhibition match but they declined. Both said, they want a fight and will be aiming for knockout wins.

See the full interview with BKFC Asia CEO below:

Chapman explained that there are future plans in 2023 to expand into bare-knuckle Muay Thai fighting, with Buakaw vs Saenchai set to take place under this ruleset. The BKFC Asia CEO is unable to reveal very much, but he did illustrate while speaking to LowKickMMA:

Who would you like to see compete in BKFC Muay Thai?