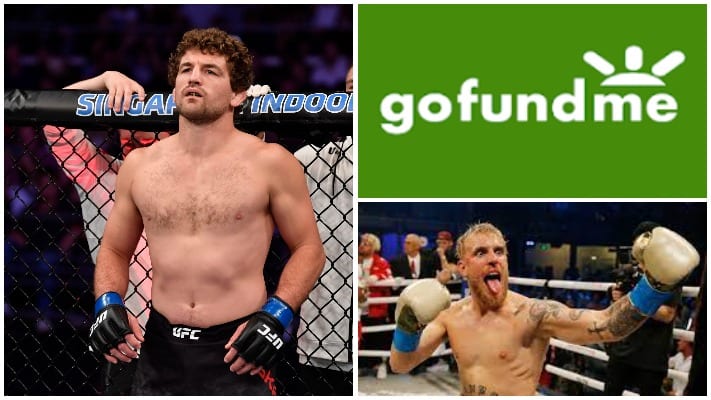 Ben Askren wants to make his fans happy. So much so that he is willing to let fans pay him directly to choke out Jake Paul.

Askren will make his professional boxing debut against YouTuber Jake Paul in an eight-round match on April 17 at the Mercedes-Benz Arena in Atlanta, Georgia. During a light-hearted sparring session filmed by Triller, Askren jokingly offered to let fans pay him for the choke. (H/T Mirror)

“One of you guys can start a GoFundMe – how much would you give me to choke Jake Paul out with a guillotine? If the number’s bigger than my purse, maybe I’ll do it.”

Askren, the former Bellator champ and UFC fighter, has not minced words about how little he thinks of Paul in the build-up to this fight. He will receive the largest purse of his career for the match and believes that his victory is inevitable against Paul’s “amatuer” boxing skills.

“Boxing, obviously it’s different, but I told someone the other day that I’m really good at athletics. I wanted to be a really great wrestler. I won NCAA titles and made the Olympics. I wanted to be a good mixed martial artist. I won multiple belts in multiple organizations. If I want to beat up an amateur boxer, it ain’t gonna take me more than three months of training to do so.”

Personalities are weighing in on this fight from around the world of entertainment and combat sports.  Dana White and Snoop Dog have discussed a massive bet on the match-up. Multiple MMA fighters, including Jorge Masvidal, Colby Covington, Sean O’Malley, and Mike Perry, have all provided their predictions. Boxing analyst, Paulie Malignaggi, has also weighed in and doesn’t like Askren’s chances favoring Paul in the bout.

Would you pay to see Ben Askren choke out Jake Paul?

December Is A Big Month For Boxing