LowKickMMA.com
Home UFC News Conor McGregor lashes out at Ben Askren after ‘Funky’ suggests he should... 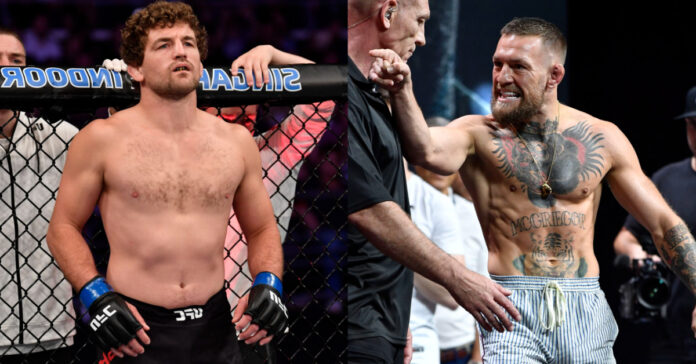 In the aftermath of UFC 280, Conor McGregor once again spoke up, boldly proclaiming that he has the exact skillset suited to defeating the new champ, Islam Makhachev. This prompted responses from numerous notable names in the industry, including Ben ‘Funky’ Askren.

Askren took to Twitter to state that McGregor was simply hoping to jump straight into a title shot, despite the fact that he has been inactive for an extensive period of time, is riding a two-fight losing streak, and is no longer ranked inside the top 10. McGregor would be quick to respond, calling Askren a ‘jackass.’

However, after Askren called for McGregor to retire, the ‘Notorious’ one ramped things up a notch, stating the following:

However, before the argument would escalate any further, Conor McGregor (or his PR Team) deleted all of his Tweets. This still prompted a response by Askren, as he posted a screenshot of the deleted tweets, paired with the following caption:

“I think Conor’s handlers took his phone, deleted his tweets and put him to bed.”

McGregor has not addressed the beef with Askren since, but he has made several new posts regarding his latest endeavor, starring in the Hollywood blockbuster, Roadhouse.

“There is no one in Hollywood with the skills or the capability to do what I am doing in this movie “the roadhouse” Box office records. Awards.”

“Fighting is easier than making movies.”

Do you think Conor McGregor will ever return to the UFC?