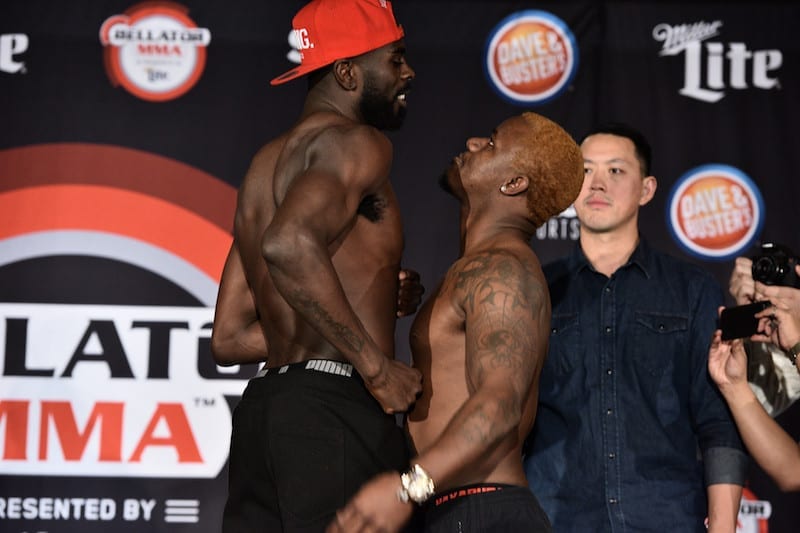 It’s once again fight day here at LowKickMMA, and the talent on display tonight (Friday, January 27th, 2017) will come in the form of Bellator 171. Headlining the card are Melvin Guillard and Chidi Njokuani, but there’s a whole bunch of great fights also taking place on the rest of the main card.

Melvin Guillard and Chidi Njokuani met in a catchweight bout in the main event of Bellator 171. In round 1, there was a feeling out process, which the fans did not enjoy. Big John told them to get after it. Guillard when for a trip takedown but couldn’t get it and Njokuani clinched with him up against the fence. Njokuani was kneed in the groin. Guillard took him down and got guard halfway through the round, but Njokuani pushed him off with his long legs. Guillard pulled guard, but Njokuani got up and kneed him in the head. In round 2, Njokuani turns a shoot takedown by Guillard into a top position for himself to start the round. Njokuani got his back and worked him over with strikes. Guillard popped his hips and scrambled to his feet. Guillard clinched with him and went for a takedown. Guillard missed a spinning elbow and fell down. Njokuani got on top of him and landed a series of strikes. In round 3, lightning fast body shots by Njokuani opens up the final round, but Guillard clinches. Njokuani gets the takedown. Njokuani got guard and worked him over with strikes. Complete domination by Njokuani. They were stood up with 30-seconds to go in the fight. Njokuani landed a big knee to the ribs, Guillard took him down and got his back. Njokuani scrambled and got on top to end the fight. Njokuani won by decision.

David Rickels and Aaron Derrow met in a lightweight bout in the co-main event of Bellator 171. In round 1, Rickels stunned him early and took him down. Rickels swarmed him with strikes on the ground and then got guard. Rickels worked him over with strikes for the majority of the round. Derrow got back to his feet and took him down with a minute to go in the round. Derrow finished the round in guard while raining down strikes. In round 2, Rickels took him down early in the round and got guard. Rickels started busted him up with strikes and elbows. Derrow wasn’t defending himself very well. In round 3, Derrow clinched with him, but Rickels landed a good combo that dropped him. Rickels finished him on the ground to end the fight.

Jessica Middleton vs. Alice Yauger was next in a flyweight bout. In round 1, they exchanged for the majority of the round, but neither fighter was showing dominance. Yauger briefly clinched later in the round, and they had a wild exchanged to end the round. In round 2, Yauger clinched early in the round and pressed her up against the fence and landed some good strikes. Middleton separated shortly after and they went back to striking. Yauger was cut under her left eye. Middleton clinched and landed a big elbow, which stunned Yauger, who was back peddling. Yauger was bleeding from her mouth and kept covered her face as it she was poked in the eye several times. In round 3, Yauger clinched with her right out of the gate and slammed her down to the ground. She pushed her up against the fence and landed some good shots. Middleton scrambled and got her back halfway through the round. Middleton had this position until the final seconds when Yauger scrambled and blasted her with strikes. Middleton was awarded the decision victory.

Opening the main card on Spike TV was A.J. McKee vs. Brandon Phillips in a featherweight bout. In round 1, big side kick by McKee opens up the round. McKee was throwing a lot of kicks and had his range down. Phillips was kicked in the groin with a minute to go. Phillips started countering and landed a big right hand with 30-seconds to go in the round. In round 2, there was not much happening in this round. They paced nicely, but neither man was landing any big shots. Phillips is catching McKee when he lunges in but not landing enough strikes to dominate the round. McKee switched levels and went for a takedown, but it was stuffed. In round 3, McKee took him down the middle of the round and got guard, but Phillips scrambled right back to his feet, which popped the crowd. Philips punched him in the cup. McKee picked up the decision win.