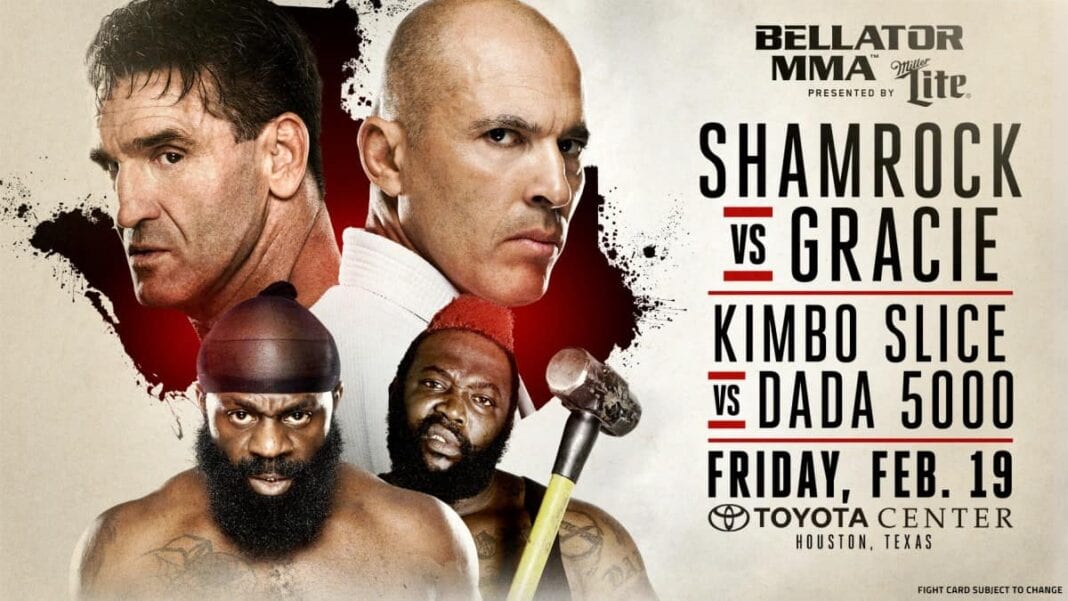 It was once again fight day here at LowKickMMA, and the talent on display on Friday, February 19th, 2016 will come from Bellator 149. Headlining the card are Royce Gracie and Ken Shamrock, but there’s a whole bunch of great fights also taking place on the rest of the main card.

Ken Shamrock and Royce Gracie met in an open weight bout in the main event of Bellator 149. Both men stayed calm, and there was not a lot of action until the 2:50-minute mark of the fight. Shamrock clinched with him but was kneed in the groin and then to the head. Shamrock fell, and Gracie landed a series of strikes to end the fight. Shamrock threw a fit after the fight about being hit low, which he was. Shamrock didn’t blame Gracie for the way the fight was stopped but rather the referee.

Kimbo Slice and Dada 5000 met in a heavyweight bout in the co-main event of this event. This was a really bad fight, to say the least, but as the Bellator color commentator, Jimmy Smith, said, you can’t stop watching as you’re intrigued. Slice got an early first-round takedown and laid on him until they were stood up. Both guys became gassed during that round, and things got bad after that. The second round was nothing special and was very sloppy. In the third round, Slice comes out and blitzed Dada with multiple punches. Dada then walked backwards and just fell from all of the damage from Slice’s strikes.

Melvin Guillard and Derek Campos met in a lightweight bout at the event. Guillard came out and was swinging for the fences and looking for the big KO. However, that did not happen and spent most of the first round on his back. Campos came out in the second round and stunned Guillard. He poured on the strikes and Guillard went down and the fight was finished.

Emanuel Newton and Linton Vassell met in a light heavyweight bout at the event. Newton kicked Vassell in the nuts three times in this fight in desperation, and a point was taken away from him in the second round. Vassell dominated him on the feet, and Newton was not as aggressive in this fight as he had been in previous fights. Newton sought for takedowns and got some, but did not look good in this fight. This one went all three rounds, and Vassell won by unanimous decision.

Opening the main card on Spike TV for Bellator 149 was Emmanuel Sanchez vs. Daniel Pineda in a featherweight bout. The story of the fight was Pineda looking to take Sanchez down and stay on top. However, for most of the fight, he got the majority of the takedowns but was taking most of the damage thanks to Sanchez. Sanchez was the better fighter on the feet and had his moments while on the ground too. Sanchez busted him up pretty good, but it was a close, back and forth, action-packed opening contest. In the end, the fight went the distance, and to the judges, saw Sanchez win the fight by split decision.

Here are the results from this event:

Royce Gracie def. Ken Shamrock via TKO (punches) at 2:22 of Round 1

Derek Campos def. Melvin Guillard via KO (punches) at 0:32 of Round 2.