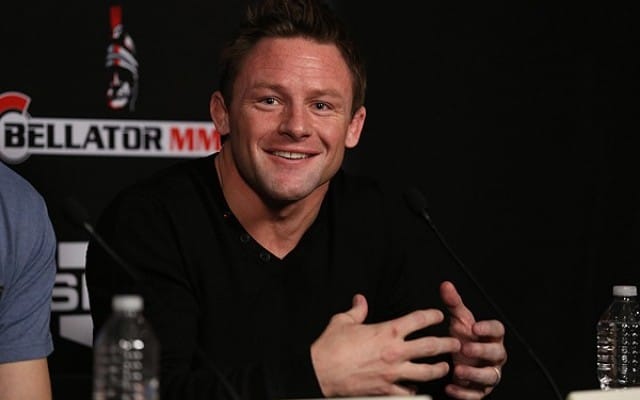 Bellator 128 went down tonight (Fri., October 10, 2014) from the WinStar World Casino and Resort in Thackerville, Oklahoma, and featured an insane night of choke submissions capped off by a close fight in the championship main event.

Interim champ Joe Warren faced off with champion Eduardo Dantas to unify the bantamweight title in the headliner. Warren not surprisingly looked to clinch often, but he also broke out some new unorthodox striking with some jumping knees a cartwheel kick.

Dantas was a game champion, landing some good kicks and elbows, grounding Warren with his judo, and harming him significantly in the fourth round. But Warren was ultimately able to power through, landing more knees and securing some big takedowns to become the undisputed bantamweight champion three rounds to two.

Touted British prospect Michael “Venom” Page faced UFC vet NahShon Burrell in the co-main event. The London-based Page used his dangerous striking and takedown defense to outpoint Burrell and earn all three rounds on the judges’ scorecards. Despite being taken out of the first round for the first time, “Venom” is now an undefeated 7-0 with bigger fights on the horizon.

Alexander Sarnavskiy squared off with Dakota Cochrane, landing an early spinning backfist and some hard punches. Sarnavskiy avoided Cochrane’s takedown to land a huge knee and end the fight with a first round rear naked, extending the number of choke submissions at Bellator to an incredible five.

The Ultimate Fighter (TUF) 17 alum Bubba McDaniel faced off with the debuting Emiliano Sordi to start the main card. McDaniel saw his two-fight win streak disappear when Sordi wrapped him up in a tight guillotine to earn the tap less than one minute into the first round. The choke earned the undefeated Argentinian 13 finishes in 13 fights.