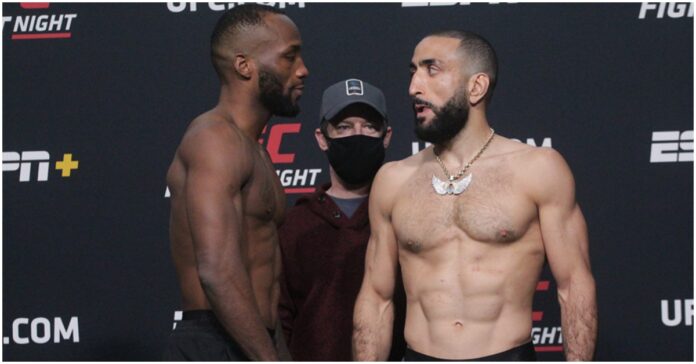 When #5 ranked Welterweight Belal Muhammad dominated Stephen ‘Wonderboy’ Thompson this past Saturday night, it was clear he was ready for a major step up in competition.

Riding a 6 fight winning streak, Muhammad firmly believes he is deserving of the next welterweight title shot over former opponent Leon Edwards.

“I literally fought eight times while Leon’s fought three times in the last two or three years,” Muhammad told MMA Fighting. “I’m the one pushing, I’m the one being active. Dana White says he likes active fighters, he doesn’t like these people waiting. So if I go out there, I get a big win, I think I earned definitely a skip in front of him.

“I feel like I’ve earned a skip in front of him already based off of the level of opponent I fought. I fought [Demian] Maia and ‘Wonderboy’ (Stephen Thompson) back to back. And he’s fought, who did he beat… [Rafael] dos Anjos and Nate Diaz, who are both 55ers. So it’s like, if you really think, he hasn’t fought any ranked 170 pounders that are actually ranked and good right now.” (Transcribed by Sportskeeda)

While Edwards is riding an impressive 10 fight unbeaten streak, he’s only fought twice in the past 2 years. Muhammad on the other hand, fought 4 times in 2021 alone.

When Muhammad and Edwards met in the octagon in March 2021, it ended in a no contest after Edwards poked Muhammad in the eye, rendering him unable to compete. The pair have been going back and forth on social media ever since.

Does Belal Muhammad deserve a title shot over Leon Edwards?