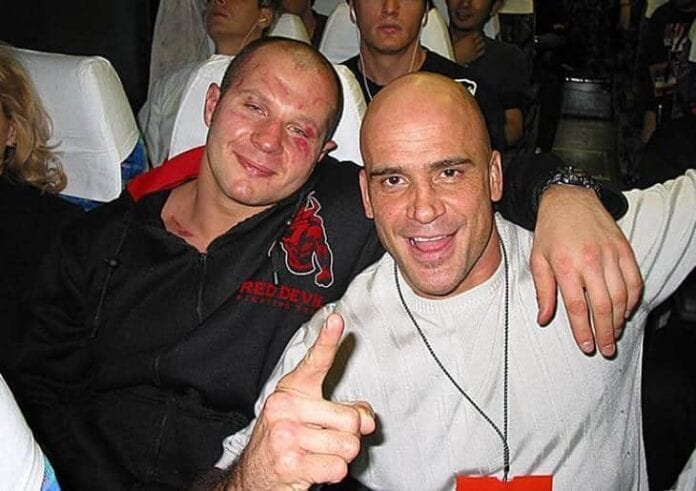 Former UFC heavyweight champion Bas Rutten fought at a time that the Japanese MMA (mixed martial arts) market was the biggest on the globe. Also a muti-time champion of Pancrase in his prime, ‘El Guapo’ would go on to commentate for Pride FC in the golden era of the sport. He sat and watched as Fedor Emelianenko tore through the promotion’s heavyweight ranks during ‘The Last Emperor’s’ ten-year reign of supremacy.

Since that time both men have retired, but Fedor rocked the MMA world with the news that he would in fact be coming back for another bite of the apple. Speculation has raged as to who might snap Emelianenko up for his second stint in the fight game, but the fact he has been out of action since 2012 raises suspicion as to how well he’ll fare against the current crop of younger heavyweights. That’s assuming the former Pride FC boss comes back as a heavyweight, as Bas Rutten tells Submission Radio that many feel that the Russian Sambo master would do well to cut a few pounds and debut at light-heavyweight:

“[Emelianenko] shouldn’t be fighting at heavyweight. The guy’s like 225 pounds. Eh, you’re just there. Lose like 15 pounds and then fight at 205. What an animal he would be. But then again, he probably fights at the weight he feels more comfortable.”

Fedor’s trademark was the age-old David vs. Goliath victory, toppling larger men in Hong Man Choi and Zuluzinho during his time in Pride. That love for beating bigger foes came back to bite him in the backside in the twilight of his career, as Antonio ‘Bigfoot’ Silva handed him a very ugly TKO loss in Strikeforce. With very little word from Fedor’s camp in regards t the when, where & how, Rutten continues with the speculation:

“205? Well, yea. If [former UFC light heavyweight champion Jon Jones] comes back, he’s an animal, too. When I think about Fedor I see him just crushing people in Japan. If I think about him coming back because maybe he had injuries and those were the reasons that he started losing? I don’t know. If I picture that Fedor coming back I think sky’s the limit for him.

“Look at the Arlovski fight,” said Rutten. “Arlovski was doing really well and then this one punch finished it all. And the way he punches! Watch that Brett Rogers fight. Every fighter loads up their punch. He’s just holding it in mid air. Suddenly the punch comes out right on the button, super powerful, drops him with one shot. Any guy like that is just a dangerous guy.”

It’s likely we won’t get a chance to see Fedor take on Jon Jones, even if the Russian legend does sign to the UFC. ”Bones’ is awaiting his comeuppance for a New Mexico hit-and-run case, and so Daniel Cormier would be a more likely foe for Fedor if he joins the Zuffa clan.

Is Bas Rutten stuck in the past, or is Fedor Emelianenko going to run the 205-pound rankings like he did the heavyweights in the 2000’s?