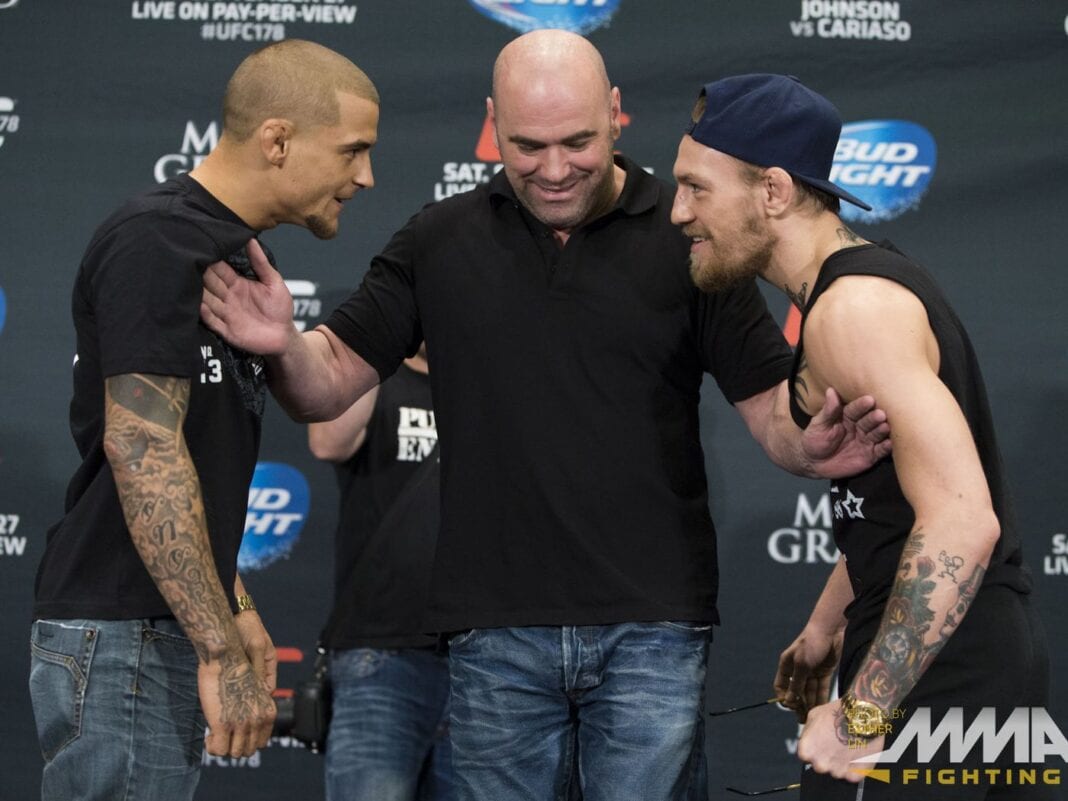 Former UFC heavyweight champion Bas Rutten believes the ground is the avenue for success for Dustin Poirier against Conor McGregor.

Although it is simply business for Poirier, he will undoubtedly be looking to get revenge after the Irishman comfortably dispatched of him via first-round knockout in their 2014 featherweight meeting.

And while Poirier has improved tenfold since, the same can be said for McGregor according to Rutten.

“The Diamond, he grew a lot, he’s a completely different fighter. But then again, Conor did that as well,” Rutten told Submission Radio. “He’s got his great hands. Can he stop the takedowns? Because now everybody knows, well, let’s see, he lost four times, four times by way of submission.

“OK, so your best bet is to get him on the ground, that’s what you need to do. But that’s easier said than done, of course, because Conor’s distance is so good. Again, if I was him, I would immediately start at southpaw and start with low kicks, low kicks. If you can neutralize that front leg, because it’s going to be very hard for him to check because he can’t turn his hip in.”

For Rutten, it’s imperative that Poirier — who has less pressure this time — doesn’t keep the fight standing against McGregor due to the latter’s striking prowess.

Ultimately, that, along with plenty of emotion, was what led to his demise six years ago.

“I think Conor has the bigger pressure, because it’s Conor,” Rutten explained. “He always will fight that, because everyone, they gravitate towards him. And Dustin, because of the first time he lost, of course he wants to win. But if he can just see this as a regular fight, whatever. Last time also it was like the big long left hook, it kind of hit the back of the head. It was a legal shot because he turned, it wasn’t Conor’s mistake that he did that.

“But now he knows, don’t be in that position, stay at distance. But then again, stay at distance with McGregor, he knows exactly how to use his reach. He’s really good with that. But I think there’s less pressure for Poirier, that I do believe. And I also think Poirier also knows that he needs to have this fight on the ground as fast as he can.”

Do you agree with Rutten? Or do you believe Poirier is capable of getting a knockout on the feet?