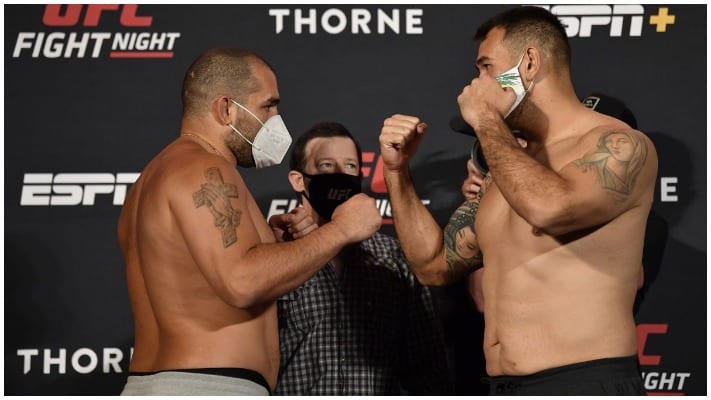 In the co-main event, we have a heavyweight match-up. Blagoy Ivanov will be looking to get back into the win column after dropping a split decision against Derrick Lewis last time out. Before that, he had picked up back-to-back wins over Ben Rothwell and Tai Tuivasa. He’ll need to get through Augusto Sakai in order to do that. The Brazilian is riding a five-fight win streak that includes wins over Chase Sherman, Andrei Arlovski, and Marcin Tybura.

Round 1: The fight starts at a really slow pace. Both fighters are really feeling out the other man – swapping legs kicks and feinting punches throughout the first two minutes. Blagoy Ivanov rushes forward and throws a huge overhand that misses. He again comes in and lands a shot to the body and one to the head in the biggest moment of the fight. Augusto Sakai is firing in leg kicks which are making an awful sound, Ivanov is going to be feeling them in the morning. Ivanov pressures his opponent up against the fence but doesn’t do much with it but his gameplan is clear now. So is Sakai’s – he’s got a heavy kick game throwing nasty shots to the legs and body. Ivanov again pushes up to the fence and fires off a few punches as the round ends.

Round 2: Ivanov opens up with a big left hand to start round one. The Bulgarian lands another big shot too! Sakai responds with a nice counter shot. He’s also landing nice kicks which appear to be bothering Ivanov who shoots for a takedown and eats a few punches for his efforts. Ivanov is landing but is starting to look tired and it seems the tide is turning in this fight. Sakai is landing more big body kicks and lands a knee in the clinches but pushes his opponent against the fence. On the break, he lands a hook then and backhand it really was beautiful stuff. The leg kicks are adding up for Sakai now he’s enjoying a brilliant round two. Ivanov is trying to throw hard shots simultaneously but he’s out of range. Just 30 seconds left on the clock Ivanov grabs a leg and secures the first takedown of the fight. A few seconds left on the clock and Sakai works his way back to his feet before the horn sounds.

Round 3: Ivanov throwing big shots to open the round lands a couple but takes a few counters on his way in. Sakai hits a leg kick. Ivanov lands a grazing shot. The Brazilian continues to rattle off leg kicks before a rare lull in the action – this really has been a good fight. The fighters clinch up and Sakai pushes the fight onto the fence. He lands a knee and an uppercut. Ivanov holds almost hits a takedown but Sakai grabs the fence to remain on his feet it’s a clear foul but the referee lets it slide. Ivanov backs up and eats a few shots. Sakai is back in his rhythm hitting leg kicks as we head into the final minute. Ivanov is pushing forward and lands one of his biggest shots of the fights but doesn’t get much of a reaction. Final seconds Sakai lands a boy kicks, Ivanov lands a punch as the bell sounds to end the fight.